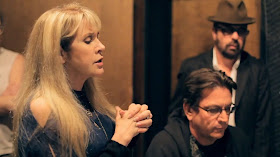 
“I do, in my brain, marry visuals and music,” says Dave Stewart.

Formerly one half of Eurythmics, Stewart has had a lifelong fascination with sound and vision.

“It started with a tape recorder when I was a little boy, about nine,” he says, “My grandmother got me an old-fashioned tape recorder, a battery operated reel to reel, so you could go outside with it. When I first recorded something outside and went back in my bedroom and played it back, it was a mind-blowing experience. It was the first time I had replayed reality.”

It wasn’t until he bought an 8mm camera in an Australian pawn shop that he combined his dual loves.

“I walked out of the shop filming,” he says,

“And I sent the films away, these 8mm three minute films. When I got them back and got a projector and played them onto the wall of my bedsit, it was a magical thing.”

“I have thousands of hours of stuff from the time I walked out of that shop.”

Among those thousands of hours is a new film, a collaboration with a music legend. Stevie Nicks brought Stewart on to produce her first studio album in a decade, and in the process they also created a song-by-song documentary, Stevie Nicks: In Your Dreams.

With In Your Dreams now done and ready to open in theatres Metro asked Stewart about his favourite movie music moment.

“I am fascinated with the use of music in films,” he says. “I thought Midnight Cowboy was fantastic. When Ratso dies at the end and Jon Voight has his arm around him and the music starts, ‘Everybody’s talking at me…’”
"IN YOUR DREAMS" - IN CANADA
Tickets On Sale Now For the Following Canadian Dates