TONIGHT! Once-in-a-lifetime-experience. Stevie Nicks "In Your Dreams" on the BIG screen - Fan Reviews 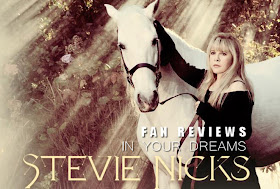 ‘IN YOUR DREAMS’ – STEVIE NICKS
ONCE IN A LIFETIME EXPERIENCE!

The film "In Your Dreams" hit U.S. theaters tonight for ONE NIGHT ONLY showings allowing fans from across the U.S. to finally get a glimpse behind the making of Stevie's last album "In Your Dreams".  If you were following along back in February, 2010 when that first tweet by Dave Stewart indicated they were working together and things were brewing, then you know that this making of documentary was always part of the long term plan to eventually have it screened in theaters... So glad it made it and from all accounts, it appears to have been a successful launch with most theaters selling well or selling out to the point where additional screens were added for tonight or additional screening days were added to the schedule.  Bodes well for the upcoming VOD and Digital release later this spring - and eventual (hopefully) DVD release.

If you happen to catch the movie tonight, for many of you it was your first time...Some of you were lucky enough to have seen it a second and third time... Some of you have yet to see it as it hasn't screened in your city yet... So for those that have seen it, what did you think?  Leave your "fan review" in the comments section.  Or you could leave it in the post on Facebook

If you haven't seen the film yet, you may want to avoid this post so not to spoil your experience. Post away!

Check out the inyourdreamsmovie.com website for further screening dates of the film particularly this coming Sunday at all iPic theaters... Sunday Matinees!