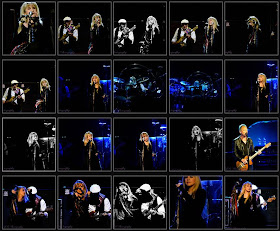 LOUISVILLE, Ky. (WDRB) -- Legendary rock band Fleetwood Mac took the spotlight in Louisville. The group hit the stage at the KFC Yum Center on Thursday, April 11. The lineup includes original members Mick Fleetwood and John McVie, Lindsey Buckingham and Stevie Nicks. The band is on a national tour after a three-year break. The new tour marks the 35th anniversary of the release of their classic 1977 album Rumours.

by Pam Windsor
Louisville.com
With no opening act – which made it all so much better - Fleetwood Mac hit the stage and rocked the KFC Yum! Center for more than two hours with a high energy, dynamic performance of their greatest hits, some new music, and even a newly discovered old song from the Buckingham Nicks days. As the show got underway, it was difficult to tell who was more excited to have Fleetwood Mac back performing live for the first time in three years – the many, thousands in the crowd – or Stevie Nicks, Lindsey Buckingham, Mick Fleetwood and John McVie.

They kicked things off with the hard charging “Secondhand News,” one of many songs they performed from their 1977 Rumours album, which remains one of the most successful in rock history and saw a deluxe reissue earlier this year. Rumours came at time of emotional upheaval for the group, with the break-up of Nicks and Buckingham, the divorce of Mick Fleetwood, and the separation of John and Christine McVie, and many of the songs reflected what they were dealing with at the time.

“Secondhand News” was quickly followed by “The Chain.”

Nicks welcomed the Louisville crowd, with a “How about those Cardinals?” offering her congratulations and later dedicating her well-known song “Landslide” in their honor.

Nicks sported a long-sleeved black jacket and short tiered skirt, adding shawls and scarves throughout the show.  She moved and spun, sometimes round and round in a dizzying fashion, maintaining her signature dramatic flair.  She and Buckingham, once a couple, seem to have struck a balance of being separate now, yet at the same time sharing a closeness, as they deliver so many songs that  reflect their history together.

The group moved through a stream of fan favorites, “Dreams,” “Rhiannon,” “Never Going Back Again,” “Sara,” “Stand Back,” “Go Your Own Way,” and more, all with strong, excited reactions from the crowd.

There was also some new music.  Buckingham explained that before this latest tour the group went back into the studio and recorded some new tracks that will be available on a new EP soon.  They performed one called, “Sad Angel.”

There was an old song, too, pre-dating Fleetwood Mac, that Nicks and Buckingham recorded many years ago.  Nicks says she recently discovered it on a “Youtube” video. “Without You,” will also be on their new EP.

It was an amazing night, with intense musical performances throughout.  There were strong vocals from Nicks and Buckingham, exceptional guitar work from Buckingham, who has never ranked as high as he should on those “greatest rock guitarist” polls.  Some of the highlights included Buckingham’s solo performance of “Big Love,” (during a break when the rest of the band left the stage), that saw his hands and fingers moving  up and down the guitar so fast the crowd could hardly contain itself.  And later, he rocked the house in a mesmerizing performance of “I’m So Afraid.”   As he wrapped it up, he was so wound up he was banging the guitar at the end of the song with both hands.  His efforts garnered him a standing ovation.

Stellar musical performances, though, did not stop there.  Mick Fleetwood – did a tremendous job during “Eyes of the World,” and during the group’s first encore “World Turning,” Fleetwood  did an electrifying four minute drum solo, reminding those who may have forgotten, what rock and roll is all about.

John McVie was also in rare form on the bass throughout the evening, providing the foundation for the sound that has always been Fleetwood Mac.

There were some slight differences such as a few lower notes where songs in years past featured higher notes, and a few song variations such as a much slower, at first almost unrecognizable beginning to “Tusk,” when compared to the original version.  But those were not detractions, just minor observations for anyone paying attention.  Overall, the Fleetwood Mac concert was more than a show, it was an event. It’s rare to see four core members of one of rock and roll’s greatest groups, just as strong as ever, performing songs they made famous some thirty-five years ago.  It makes the idea of new music on an upcoming EP – something to get excited about.