Fleetwood Mac Return To The Concert Stage This Sunday in Canada

FLEETWOOD MAC IN CANADA
After a week long break from their current 2013 World Tour, Fleetwood Mac are set to land in Winnipeg, Manitoba, Canada at MTS Centre on Sunday May 12th for their 3rd Canadian date of the tour. Previous Canadian dates were Toronto and Ottawa in mid-April.

The next week through next Sunday will be dedicated to entertaining Canadian fans across western Canada with dates scheduled in Saskatoon Tuesday, May 14th, Edmonton May 15th, Calgary May 17th and Vancouver May 19th.  The 8th and final Canadian date doesn't take place until June when they hit Montreal on June 18th.

A few tickets left for each show at Ticketmaster.

Couple of Concert Previews from The Winnipeg Free Press and The Edmonton Journal: 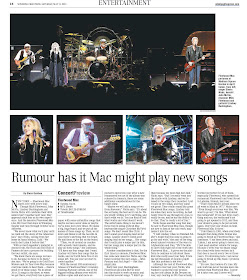 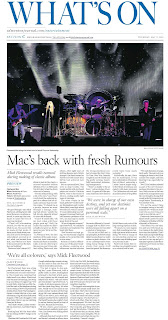 STEVIE NICKS "IN YOUR DREAMS" 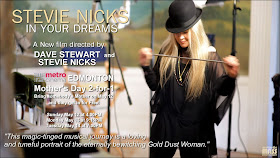 The new documentary from Stevie Nicks and Dave Stewart titled "In Your Dreams" chronicling the making of Stevie's last solo album "In Your Dreams" follows the Fleetwood Mac tour across Canada with it's first theatre screenings coming up in Edmonton on Sunday, May 12th at Metro Cinema, with Saskatoon, Regina, Calgary, and Vancouver to follow. Tickets available at the box office, or in advance if available. Complete list of Canadian screenings listed below.

Mother's Day 2 For 1:
On Sunday in Edmonton...  Bring someone's mother and they get in FREE!