Fleetwood Mac will now kick off its 2013 New Orleans Jazz Fest set at 4:40 p.m. on Saturday, May 4, 30 minutes earlier than originally scheduled.
By Keith Spera
NOLA.com 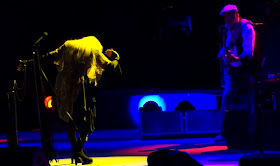 Producers of the New Orleans Jazz Fest have tweaked the timing of several shows this weekend. The most significant change? On Saturday, May 4, Fleetwood Mac's headlining Acura Stage set will start 30 minutes earlier than previously scheduled, at 4:40 p.m. instead of 5:10.

As a result, the band is now allotted two hours and 10 minutes of performance time.
Nickslive at Saturday, May 04, 2013
Share