FLEETWOOD MAC LIVE
PHOENIX, AZ - US AIRWAYS CENTER
MAY 30, 2013
By Ed Masley
The Republic | azcentral.com
It’s been 35 years since Fleetwood Mac released the soft-rock masterpiece that even now remains their calling card, the 11-times-platinum “Rumours.” And with four-fifths of the classic “Rumours” lineup — Lindsey Buckingham, Mick Fleetwood, Stevie Nicks and John McVie – back together again, they weren’t shy about blowing the dust off a good portion of that album Thursday night at US Airways Center, setting the tone with a spirited “Second Hand News” and then following through with “The Chain” and the chart-topping “Dreams.”

If Buckingham’s electrifying presence on guitar and vocals made it hard to believe you were watching a man who’d aged 35 years since releasing those songs, Nicks’ vocal on “Dreams” made it clear that the passage of time had not affected everyone in Fleetwood Mac the same. And it’s not that her vocal was off. It’s just that she’d rewritten the entire melody to suit the lower range her voice has settled into in her 60s, which detracted from a number of essential hooks ingrained in every Fleetwood Mac fan’s head. “Rhiannon” also found her backing down from the challenging notes, although delivered with real urgency. But Nicks, who told the crowd “It means a lot to be here; I was born here,” had redeemed herself and then some by the time the night was through, with her charisma and her vocals, really shining on an understated “Landslide,” which may have taken on an even more reflective tone with age.

Video and Fan Photos Below....

It wasn’t all nostalgia, either. After three shots of “Rumours,” they tested the waters with “Sad Angel,” a new rocker driven by Buckingham’s chugging guitar. And later in the set, they treated the fans to the newly recorded soft-rock gem “Without You,” a Buckingham-Nicks song that went missing in the ’70s only to resurface in 2010 on YouTube, of all places.

Buckingham set up a showcase of “Tusk” with a speech that began with “There is a rule of thumb — I guess you could call it an axiom — in the music business. If it works, run it into the ground and move on.” It’s with great pride that Buckingham looks back on “Tusk” as the artistic left-field triumph no one, least of all the label, wanted after “Rumours.” Now, of course, it’s revered as one of rock’s most enduring misunderstood classics. And the first two songs they played from “Tusk” — “Not That Funny” and “Tusk” — have certainly retained their offbeat charm, while the Nicks songs that followed, “Sisters of the Moon” and “Sara,” served as a haunting reminder that “Tusk” had more to offer than Buckingham pushing the envelope into artier waters.

Buckingham followed the tribute to “Tusk” with a solo acoustic rendition of 1987’s “Big Love,” which showcased his skills on acoustic guitar with urgent vocals driving home the chorus hook. That led to a breathtaking version of “Landslide” with just Buckingham and Nicks on stage, the former couple holding hands in one dramatic pause while Nicks made the most of the poignant potential in the line “I’m getting older, too.”

From there, they dove back into “Rumours” with the slowed-down country blues of “Never Going Back Again.”

Nicks set the tone for “Without You” with a charming trip down memory lane and followed through with “Gypsy,” an early ’80s hit from “Mirage” that featured one of Nicks’ strongest vocals of the night and some of Buckingham’s flashiest guitar work. They stayed on “Mirage” for the spirited roots-rock abandon of “Eyes of the World” before another of Nicks’ most compelling showcases, the “Rumours” highlight “Gold Dust Woman.”

Next, Buckingham managed to bring in one of Thursday’s most enthusiastic crowd responses for a song that was neither a single nor a track from “Rumours.” A rarely heard highlight of Fleetwood Mac’s self-titled album, their first with Buckingham and Nicks on board, “I’m So Afraid” brought nearly every audience member to his or her feet with a jaw-dropping blend of musicianship and showmanship. He tore it up convincingly enough to win the adulation he deserved for that performance.

Nicks’ solo hit “Stand Back” kept the audience happy but the concert may have peaked with the set-closing “Go Your Own Way,” a rousing “Rumours” highlight that featured Nicks in a little black top hat and Buckingham squeezing out another flashy solo.

The encore got off to an odd start when Mick Fleetwood interrupted “World Turning” with a lengthy solo and then followed with the worst momentum killer in the history of rock and roll, introducing the band. You could feel the energy that peaked with “Go Your Own Way” dissipating by the second. But they made it worth the wait with yet another “Rumours” highlight, “Don’t Stop” — as in thinking about tomorrow. There was probably something ironic in seeing them close that particular show singing “Yesterday’s gone,” but here’s the thing: The highlights of that concert, of which there were many, served as a rousing reminder that maybe sometimes it’s cool to stop thinking about tomorrow and give yesterday another try, especially if you can make it feel as relevant as this show's most compelling moments.

Fleetwood Mac - US Airways Center - 5/30/2013
By Shane Kennedy
Phoenix NewTimes
It would be challenging, at best, to attempt to write an objective concert review about a band that your love for borders on obsession, so I'm not going to try.

Fleetwood Mac's show at US Airways Arena last night, was...well, it was fine. It was what one could reasonably expect from a band at this stage in its career, a career that began well over forty years ago. They played the familiar hits, minus the Christine McVie (who stopped touring with the band in 1998) selections, which meant no "Say You Love Me," no "Over My Head," no "You Make Loving Fun," no "Songbird," no "Think About," no "Little Lies."

Her noticeable absence left the band less like the Fleetwood Mac that we all know and love, and more like the Lindsey Buckingham/Stevie Nicks show, with John McVie and Mick Fleetwood serving as a backing band. Much of the banter centered around the (to say the least) well-documented drama between former lovers Buckingham and Nicks. We all know the story.

The actual members of Fleetwood Mac were the minority on stage. A second guitarist, a keyboardist, two female backing vocalists, and a second drummer were curiously hidden behind Buckingham's wall of amplifiers and augmented the band as they lumbered through opener "Second Hand News," and on through "The Chain" and "Dreams."

And then something beautiful happened. Buckingham mentioned that they had been recording new material, some of which appears on their new EP, the awkwardly titled Extended Play and introduced one of those selections, the excellent "Sad Angel." I cannot, off the top of my head, think of any other band that has been around as long as they have that has issued a song so fantastic. I'm serious. It's really good. The entire band, Mick Fleetwood especially, seemed to light up with the opportunity to play great new material.

The band followed up with Nick's witchy crowd pleaser "Rhiannon," and though her voice has changed over the years, she still has "it." There is something very Billie Holiday about her, although her range in her 60's far exceeds Holidays at 20. Her youthful range has been replaced by a depth that can only come from a lifetime of being Stevie Nicks.

After "Rhiannon," Nicks left the stage, leaving Buckingham to talk about the creative versus commercial challenge they faced after the blockbuster Rumours album, and the follow up, Tusk--a sprawling and uneven double album that has become the stuff of legend, and a musicians' favorite (see notes below.)

Nicks returned to join the band for "Not That Funny," "Tusk," and "Sister of the Moon," which could've been "Rhiannon 2" and is a song that, on record, seemed underdeveloped, likely due to Buckingham's lack of interest in working closely with Nicks at that point in their relationship. They don't make that mistake live. It's a moody, spooky, epic live, one for which Nicks can play up the twirling White Witch persona to the hilt. The lovely "Sara" closed out the Tusk portion of the show, which for me, at least, was the highlight of the evening.
Buckingham was left alone on the stage for his frantic "Big Love," Nicks then returned for her classic reflective weeper "Landslide," then joined Buckingham for his sweet and sour "Never Going Back Again," another new one--actually a just-recorded version of a pre-Mac Buckingham-Nicks demo called "Without You." This acoustic portion of the show ended with Buckingham and Nicks in a touching embrace.

A small drum kit was set up for the Fleetwood for a mellow version of the fantastic "Gypsy" and the neurotic rave-up "Eyes of the World," both from the underrated Mirage LP. Another Nicks showcase, the intense "Gold Dust Woman," and Buckingham's equally frightening "I'm So Afraid" followed.

I'm not sure what made the band decide to include Nicks' solo hit "Stand Back" in the set; if it were up to me (and it wasn't) I would've picked "Edge of Seventeen" off Nicks' solo debut, Belladonna--and if they're doing solo material, why not Buckinghams solo classic "Trouble," or the fantastic "Don't Let Me Down Again" from the pre-Mac Buckingham Nicks?

The familiar opening chords from "Go Your Own Way" sent the audience into near hysterics, and with that the band said their farewells.

"World Turning," as usual, turned into one of those things that I have never heard anyone say that they actually like, the drum solo. Mind you: I frickin' LOVE Mick Fleetwood. But, ugh, drum solos. The obligatory "Don't Stop" followed, to the audiences delight, and with that, the band cleared the stage before, due to popular demand, returning once more for Stevie's tear-jerker "Silver Springs" and, finally, "Say Goodbye" from the 2003 (mostly) post-Christine McVie album Say You Will.

Looking over set lists and reviews from other stops on this tour reveals the same, exact, nightly set list, and same nightly banter. Perhaps that's to be expected in this day and age, but don't we always want to believe that we are special and every show is unique?

All in all, I doubt there was anyone in the audience who left feeling slighted, other than the one holdout who thought there was a chance of them busting out Peter Green's "Oh, Well."

The band was indeed the "Big Machine" that Lindsey frequently refers to them as, and with any machine that big, nothing was left to chance, which would explain the teleprompter in front of Stevie.

For me, one of the great joys of the show was seeing, and hearing, John McVie and Mick Fleetwood play together, as they have for almost 50 years now, and as seamlessly as ever. One cannot say enough about their chemistry and history. Oh, the places they've been!

And despite the hair splitting, it was a great joy to go with them last night.

Critics Notebook:
Last Night: Fleetwood Mac at US Airways Center (See the full slideshow of the concert)
Better Than: The lousy Just Tell Me That You Want Me Fleetwood Mac tribute album that came out a few months ago. Most of that crap was just awful.

Personal Bias: Um, a bit. I must confess that I own numerous bootlegs recordings, VHS tapes, a laserdisc, a t-shirt, two belt buckles, and yes, I also have a Fleetwood Mac cover band that exclusively plays material from Tusk. I frickin' love Fleetwood Mac. Seriously. 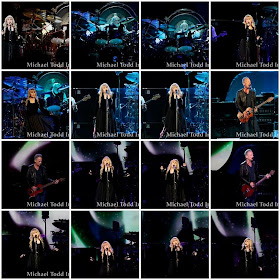 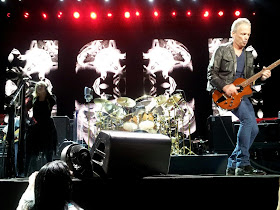 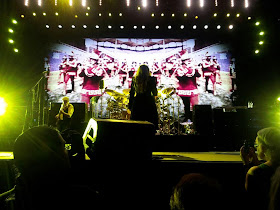 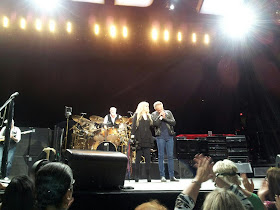 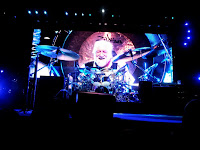 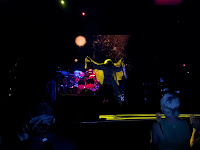 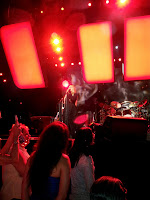 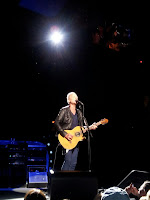 Above Photos by Happygirl417 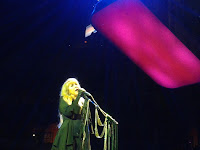 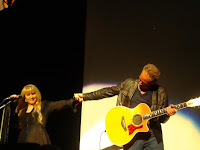 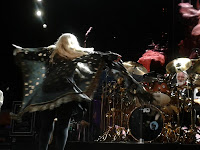 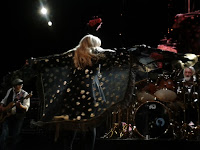 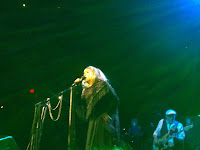 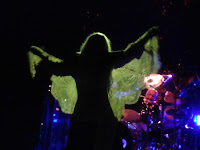 Above Photos by Jeannie Kartis

Above 2 Photos by Michael Meister