NEW ORLEANS — What a difference a day makes. After a Friday of mud, wind and chill, Saturday saw the sun return to the New Orleans Jazz and Heritage Festival. The temperature rose into the 70s, the mud receded.


The cooperative weather likely helped draw what must have been one of the biggest crowds in Jazz Fest history to classic-rock band Fleetwood Mac’s headlining show at the Acura Stage. The audience maxed out space on the Fair Grounds Race Course infield and bordering racetrack.


Fleetwood Mac singer-guitarist Lindsey Buckingham used his introduction of a newly recorded Fleetwood Mac song to explain the return of the band that’s sold 100 million albums.
It would be easy to assume, Buckingham said, that a group with decades together in the music business would have nothing new to discover. On the contrary, he said, “there seem to be a few more chapters left in the history of Fleetwood Mac.”

“We’re so excited to be in your amazing city,” Nicks said after the band opened with “Second Hand News” and the autobiographical “The Chain.”

The band played many of the hits the crowd expected. “Rhiannon,” a Nicks signature song, also came early in the show.

Nicks, always the most visually striking member of the group, wore blonde bangs, oversized tinted glasses that looked very ’60s and one of her witchy black outfits. Later in the show, she donned a top hat for “Go Your Own Way.”

True to Fleetwood Mac history, one of the new songs the band played — released via iTunes last week — was inspired by a disagreement between Buckingham and Nicks. He responded to her reluctance to make a full-length album by writing “Sad Angel.”

“Hello, hello, sad angel,” Buckingham and Nicks sang together on the Acura Stage. “Have you come to fight the war? … The crowd’s calling out for more.”

Nicks and Buckingham took center stage again for “Landslide,” from 1977’s landmark “Rumors” album. The pair performed the song as a duet, with her singing and him playing his finger-picking, multi-voiced acoustic guitar.

The band didn't disappoint. For two and a half hours, they covered most of the hits (I'm sad about the omission of "Seven Wonders"), two songs from the new Extended Play EP, and a handful of album tracks. But the show was more than just an exercise in nostalgia. The songs and the act of performing them clearly still feed something in the members. 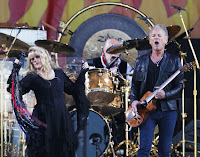 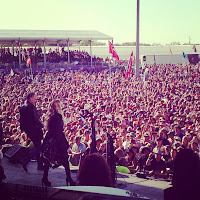 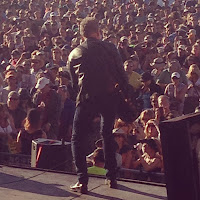 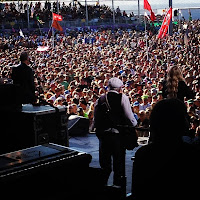 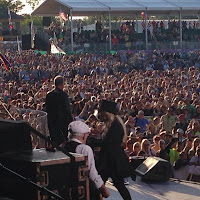 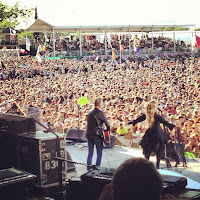 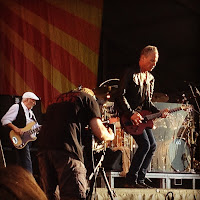 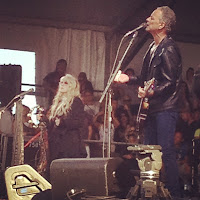 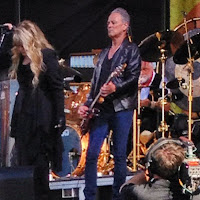 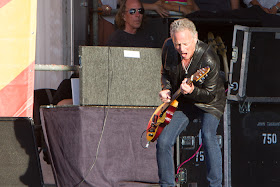 
Midway through Fleetwood Mac's two-hour-and-20-minute headlining set at the New Orleans Jazz Fest's Acura Stage on Saturday, Stevie Nicks spun a tale about "Without You." Originally a poem, she and then-paramour Lindsey Buckingham recorded it in the early 1970s for their unreleased second duo album. "Without You" faded into the hazy mists of memory until they "rediscovered" the song three years ago on YouTube.

"We loved it, we lost it, we found it," Nicks explained.

She was speaking of the song, but she might well have been describing the arc of Fleetwood Mac's career, one of rock's great success stories and soap operas. Like the Eagles, Fleetwood Mac accounted for one of the best-selling albums of all time, as well as one of the most enduring catalogs in American popular music. Also like the Eagles - and with the additional baggage of multiple intra-band romances - they fractured badly, only to come together again as an older and presumably wiser unit. 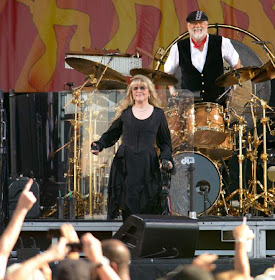 Much of the Fair Grounds was still a muddy bog on Saturday, but the weather was picture perfect - clear skies, mild temperatures. Tens of thousands of people filled the Acura Stage field and spilled over the dirt track all the way to the fences.

What they witnessed in the second half of Fleetwood Mac's set was a band that still very much wants to be a band. Nicks, Buckingham, drummer Mick Fleetwood and bassist John McVie -- Christine McVie, John's ex-wife and the lead singer on several Mac hits, has not toured with them in years -- could have phoned in a greatest-hits recital and called it a day.

But to their credit, they were not afraid to take chances, and their time. Last week, Jazz Fest moved up Fleetwood Mac's start time to 4:40 p.m., giving the band 30 minutes more than originally scheduled. They easily filled them.

The show's early going included classics -- "The Chain," "Dreams," "Rhiannon," "Tusk" -- as well as "Sad Angel," from a new Mac EP. "Every time we go apart and come back together, it's different," Buckingham said. "You'd think a band that's been together as long as us would have nothing new to discover, but there do seem to be a few chapters left in the history of Fleetwood Mac."

History still weighs heavily on them. But now they seem to share the warm camaraderie of veterans who survived a war together. Midway through the show, Nicks and Buckingham were left alone for an intimate duet on "Landslide." Buckingham finger-picked an acoustic guitar as Nicks sang, "I'm getting older." At the song's conclusion, he gallantly kissed her hand.

When Nicks and Buckingham first joined Fleetwood Mac, some fans of the band's first incarnation as a blues-based rock group were horrified, but they provided the necessary ingredients for mass popularity. A couple at the time, they came as a package; Nicks joked that Mick Fleetwood was really only interested in Buckingham's guitar skills.

"The voices, all that stuff was completely secondary," she said. "They just wanted you, let's face it."

Buckingham grinned: "It worked out OK."

At the Fair Grounds, Nicks battled a "New Orleans bug" that was stuck in her throat. "I need some coffee or I'm never going to get through this next song," she said. "If it totally sucks, Lindsey will be singing lead."

The next song was "Gypsy," which would have been an unfortunate choice for Buckingham. Happily, Nicks managed just fine. "Thank you everybody for being so patient," she said. "We're learning to live with that bug."

She accented her black-on-black ensemble -- high-heeled, platform suede boots and, for one song, a top hat -- with sparkling strands and scarves on her microphone stand and a succession of shawls. During "Gold Dust Woman" -- which Fleetwood prefaced with a bass drum and cowbell beat -- she and the band embarked on an extended breakdown. "Baby, baby, baby, you should see me now," she sang. She traced the silhouette of a woman -- a gold dust woman? -- in the air, then turned to face Fleetwood's drum kit, holding her shawl aloft like angel wings.

Buckingham's voice was a bit craggy at points, but his guitar work was consistently aggressive and vital. During a romp late in the set, he ripped off distorted, dirty riffs, high-stepping and stomping across the stage. He pounded the guitar's neck with his fists, and slapped it, producing squalls of sound. Afterward, he tapped a hand to his heart, then blew the crowd a kiss.

The band's auxiliary keyboardist -- there also was a secondary guitarist, and two female backing vocalists -- carried Nicks' solo hit "Stand Back." They went back to the Mac with "Go Your Own Way." It got off to a shaky start; Nicks eyed Buckingham from across the stage, as if trying to get in sync with him. It was all good once the crowd took over the chorus. Buckingham, the bite still in his guitar, ended the song atop Fleetwood's drum riser, whacking a cymbal with his bare hand.

The encore opened with a sturdy "World Keeps On Turning," its churning riff angular and lean. It was a bit late in the day for a drum solo, but Fleetwood took one anyway. "You know it's comin!" he shouted.

Although Christine McVie no longer tours with the band, her signature composition "Don't Stop" does. Buckingham sang the first verse, Nicks the second. "Don't Stop" is about moving beyond grief, about looking toward a brighter day. "Yesterday's gone," they repeated.

Not if you're Fleetwood Mac, it isn't. Yesterday, rediscovered, still sounds pretty great.


All the cool young kids flocked to the Gentilly stage to catch hot French pop band Phoenix execute songs from their new Bankrupt! album, along with irresistible hit Lisztomania from 2009. Given that they were scheduled against Fleetwood Mac, the size of their audience was impressive.

But lovers of classic Baby Boomer pop-rock, and their grandchildren, packed the huge field of the Acura stage to witness a wonderful reunion of Fleetwood Mac. The group in various configurations has been around since 1967, but the lineup on Saturday was the beloved classic version of Lindsey Buckingham, Stevie Nicks, Mick Fleetwood and John McVie, missing only retired Christine McVie. The group paid loving tribute to its past, taking pains to explain the origins and context of the songs and digging out decades-old obscurities. Buckingham introduced several songs from 1979's Tusk, an album he said was a turning point in their career. When it came to the classic hits, Rhiannon seemed perfunctory but the set reached its peak with a heartfelt Landslide, sung by Nicks with an air of resignation. Nicks, wearing a blue velvet long-sleeved gown with a gold wrap, charmed the crowd with a brief a capella version of New Orleans from her recent solo album, In Your Dreams.

The whole approach, though well-curated, seemed a bit too low-key for a festival crowd that had been camped in the mud for most of the day.


NEW ORLEANS — Little Big Town says that some networking they did is paying off with a chance to cross a couple of items off their "bucket list."

After playing Bayou Country SuperFest in Baton Rouge last year, group member Karen Fairchild said they talked to festival producer Quint Davis about other things they hoped to accomplish. They mentioned that they'd one day like to perform at the New Orleans Jazz and Heritage Festival.

Davis was in a position to help since he also produces Jazz Fest.

Schlapman said early in their career they had the chance to meet Lindsey Buckingham of Fleetwood Mac, which she described as an "amazing harmony band."

"Being able to share a stage with them is one of our greatest wishes," she said.

Fairchild said they've watched Jazz Fest from afar for years. "The who's who of music shows up year after year at the festival. Who wouldn't want to play there?"

Flags flying amid a cool breeze, music fans packed the festival grounds by the stage where Little Big Town and Fleetwood Mac performed. Some put down tarps over the muddy infield. Others sat in chairs, wore rubber boots or stood barefoot to hear the bands.

"Once you're in it, it kind of feels good," said Mary Kathryn Gatlin, of Greenville, S.C., who danced shoeless in the mud, the muck covering her feet past the ankles. Gatlin was taking in her first Jazz Fest with her sister, Frances Gatlin.

The pair had been at the stage since noon, about an hour after the gates opened.

Many danced as Fleetwood Mac performed such hits as "Dreams," "Rhiannon," "Gypsy," "Tusk" and "Landslide," which drew huge roars from the crowd when Stevie Nicks introduced it.

Nicks also delivered her tribute to the host city, singing a portion of her song, "New Orleans," which she said she wrote after Hurricane Katrina in 2005. "I wanna get a room in New Orleans, I wanna sing in the streets of the French Quarter," she sang.

The band also performed a new song, "Sad Angel," testing it out with the crowd. Toward the end of their set, they played an old favorite, "Go Your Own Way" at the end of which Buckingham shouted to the crowd, "New Orleans, we love you!"

They left the stage briefly before returning for an encore performance of "The World Keep On Turning," a song from their self-titled first album released in 1968 and "Don't Stop."
Nickslive at Sunday, May 05, 2013
Share