Last week, Fleetwood Mac released their first new recordings in almost a decade -- a four-song digital EP
titled Extended Play.  The collection features three new tunes written by singer/guitarist Lindsey Buckingham -- "It Takes Time," "Miss Fantasy" and "Sad Angel" -- as well as a Stevie Nicks-penned track called "Without You" that dates back to her and Buckingham's pre-Fleetwood Mac days, when they performed as a duo. 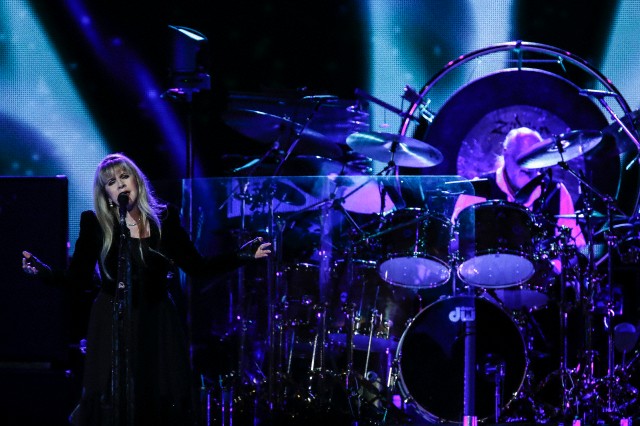 Nicks recently chatted with ABC News Radio about the new songs, and revealed why the band decided to release just a few songs rather than a full-length album.

"In this day and age, nobody really wants an album anyway, [and] we didn't have time to do a record anyway, because we were all working all last year," she explains.  "And…when you do a record, especially a Fleetwood Mac record, that means you rent a house and you're working for almost a year.  We didn't have that year.  So, this way, we have new songs."


"I didn't go because my mom had just passed away, and I really just couldn't go into the studio," she points out.  "So they went in basically without me, and that was fine."

Stevie adds that, although she didn't participate in the early sessions, Lindsey made an effort to come up with material that was well-suited for her.  "Lindsey just tried really hard to see through my eyes," she notes.  "He certainly knows me well enough to do that."

Nicks finally got the chance to add her voice to the new tracks late last year when she visited Buckingham at his home studio.  "He and I picked…two songs out of the several songs that they did that I like very much, otherwise I wouldn't have wanted to sing on them," explains Stevie.  "We did them, and we finished all the vocals and they came out great."

Nicks also brought in her old song "Without You," which she reportedly had rediscovered after coming across an old demo that had been posted on YouTube.

"We can't figure out for the life of us why it didn't go on the Buckingham Nicks album," says Stevie, referring to the 1973 album she and Lindsey recorded as a duo.  "But it didn't and it's just this amazing song…So we rerecorded it and it came out great."

Extended Play is available now at iTunes and AmazonMP3 for $3.96.  Fleetwood Mac has regularly been playing two songs from the EP, "Sad Angel" and "Without You" during their current North American tour, which is mapped out through a July 6 show in Sacramento, California.  The band also has a European trek planned for the fall.