via @billboard Fleetwood Mac: Releasing More New Songs a 'Matter of How and When'

Fleetwood Mac: Releasing More New Songs a 'Matter of How 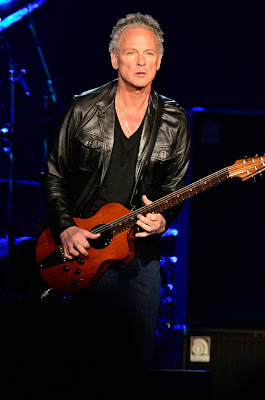 Lindsey Buckingham says the group has five more unreleased tracks. "The whole thing is just kind of wide open now, and it really is tantalizing to be able to put together just a few things, three or four songs on an EP"

Buckingham tells Billboard that he, drummer Mick Fleetwood and bassist John McVie "cut eight songs" with producer Mitchell Froom last year after Fleetwood Mac decided it would be touring this year. Three of those -- "Sad Angel," "It Takes Time" and "Miss Fantasy" -- are part of the "Extended Play" digital release that came out May 6, joined by "Without You," resurrected by Stevie Nicks from the Buckingham Nicks days before they joined Fleetwood Mac in 1975.

Check out the full article at Billboard

Buckingham says "it may be too early to tell where things are going to go" with the remaining songs, but he adds that "it's safe to say there is more than these four songs that you're going to hear from Fleetwood Mac -- it's just a question of how and when, y'know?"

The "when," of course, is complicated by Fleetwood Mac's current tour, which crosses North America through July 6 and then heads to Europe in September. But Buckingham acknowledges that "Extended Play" has certainly given the veteran group a fresh perspective on releasing new music rather than the drama and trauma of making an entire album, as it's done in the past.

"When I was growing up, EPs were all over the place," Buckingham notes. "When I was growing up, albums were not really an art form; the single was the thing, and in some ways it has gotten back to that a little bit. The whole thing is just kind of wide open now, and it really is tantalizing to be able to put together just a few things, three or four songs on an EP. There is something quite effective about that, for sure. I have no preconceptions one way or the other in terms of what Fleetwood Mac will do or even what Fleetwood Mac should do. You just do what you can do and what makes sense logically -- and politically."

Fleetwood Mac has been playing "Sad Angel" and "Without You" regularly in its shows, and has dug into its catalog for "Sisters of the Moon" -- part of a four-song blast from 1979's "Tusk" that Buckingham says he's happy to have in the set.

"After all this time it's very sweet we're able to sort of tap into that, just on more of an overview level," Buckingham reports. "I think we're playing better, or as well, as we've ever played. It's kind of a lovefest between Stevie and me out there, which is great. And this time there seems to be an enhanced appreciation of the body of work. There seem to be a lot of young people at the shows -- not that there haven't been before, but there seem to be more this time. So I'm having a great time out there. We're just killing it out there as far as I'm concerned."

Fans, meanwhile, are hoping that the tour -- which coincides with the 45th anniversary of the release of the very first Fleetwood Mac album -- will catch up to one of the group's most celebrated alumni later this year. Mick Fleetwood rather publicly reached out to Christine McVie, who quit the band in 1998, which resulted in her visiting him in Maui as well as a Mac reunion dinner in Los Angeles. Buckingham calls the gesture "just reaching out to her as a longtime friend" and definitively says that "Christine is never going to rejoin the band."

Being together again, however, was a hoot.

"That was great fun. It was very interesting to see what that extra piece of the puzzle does to the overall equation," Buckingham recalls. "It was a trip, because she was the same old person I'd always known, and she was cracking me up. We'd always had just a great chemistry, the two of us, and we just kind of hit the ground running as soon as I saw her, which was kind of amazing. If she wants to come up and do 'Don't Stop' with us when we're in England, I'd love to see that. But beyond that I think there's not too much you can make out of it -- although I'm sure people will try."