Videos, reviews and photos from the show below.. Some really cool shots of the stage - they really transformed the arc projecting the background visuals right onto the bowl...Looks beautiful!


Review: Fleetwood Mac lights a fire at Hollywood Bowl
LA Times
By Mikael Wood
Only a band as famously twisted as Fleetwood Mac would follow an exhortation to “get this party started”
with a song as bleakly imagined as “Dreams.” That’s the indelible 1977 smash in which Stevie Nicks warns a capricious lover about hearing “the sound of your loneliness like a heartbeat,” and Saturday night at the Hollywood Bowl, Fleetwood Mac performed it near the beginning of a sold-out concert that Nicks said represented the group’s happy homecoming after several weeks spent on the road.

The long-running pop-rock outfit, which formed as a London blues band in 1967 but didn’t attain superstardom until it later relocated to L.A. and hired Nicks and singer-guitarist Lindsey Buckingham, is halfway through a three-month North American tour; it’s to play Anaheim’s Honda Center on Tuesday, then circle back to Staples Center on July 3.

Yet if Saturday’s show was intended to start a party, as Nicks declared, Fleetwood Mac hardly had good times on its mind. Rounded out by drummer Mick Fleetwood and bassist John McVie (along with five auxiliary musicians), the group sounded sharper and more aggressive -- simply louder too -- than it had in years as it tore through old songs such as “Gold Dust Woman” and “The Chain,” in which Buckingham growled, “Damn your love / Damn your lies,” over grinding electric guitar.

As with “Dreams,” both tunes came from the band’s blockbuster album “Rumours,” which famously caught the romantic turmoil then raging among various members of the group (including McVie’s ex-wife Christine, who quit in 1998). At the Bowl, though, Fleetwood Mac stripped the songs of the soft-rock sheen that helped drive “Rumours” to sales of nearly 20 million copies; it was exposing the desperation that simmers beneath the catchy choruses.

In “Second Hand News,” Buckingham strummed his guitar so hard that he had trouble restraining himself to the song’s already-brisk tempo. And though Nicks, who turned 65 on Sunday, has lost some of her high notes to age, she used her imperious drone to accentuate the drama in “Silver Springs.”

The 2½-hour set roamed beyond “Rumours” to Fleetwood Mac’s self-titled 1975 album (its first with Buckingham and Nicks) for “Landslide” and “Rhiannon”; to early-’80s hits such as “Gypsy” and Nicks’ solo “Stand Back”; and to “Tusk,” the willfully experimental “Rumours” follow-up that Buckingham admitted must have confounded executives at the band’s record label.

For “Not That Funny,” he bore down on his guitar, cranking out crunchy punk chords; later, Nicks roughed up her delivery in “Sisters of the Moon,” which she said the band hadn’t played onstage since 1981.

Fleetwood Mac also did two cuts from a new EP it released last month, the group’s first studio output since “Say You Will” in 2003. “Sad Angel” was a crisp power-pop tune with echoes of 1987’s “Tango in the Night,” while Nicks described the strummy “Without You” as a recently rediscovered remnant from her and Buckingham’s days as a duo. Both were received with surprising enthusiasm by the audience --  more warmly, for sure, than the Rolling Stones’ new songs were last week at Staples Center.

Before “Sad Angel,” Buckingham said that Fleetwood Mac had more fresh material but that the band wasn’t sure how to release it.

Despite its rawness, the music wasn’t uninterested in arena-rock grandeur. To introduce “Gold Dust Woman,” Fleetwood banged an enormous gong, and the drummer took a lengthy, parody-skirting solo in “World Turning.” Nicks too was taking advantage of the Bowl’s large stage, twirling with her trademark scarves in a beautiful and vicious rendition of “Sara.”

Occasionally, the show could’ve done with more polish, as in a dirge-like “I’m So Afraid” and “Dreams,” where Nicks’ and Buckingham’s harmony vocals felt unhinged in the wrong way. (They recovered in time for the pinpoint precision of “Never Going Back Again.”)

But for the most part, the live-wire intensity -- and often the outright crankiness -- Fleetwood Mac mustered enabled the band to add new meaning to songs that might have seemed to have told their stories already. “You should see me now,” Nicks sang in a line she appended to “Gold Dust Woman,” and for a night at least that was within reach.
GO YOUR OWN WAY
More Video:
Sad Angel | Tusk | Not That Funny | Don't Stop 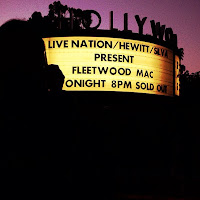 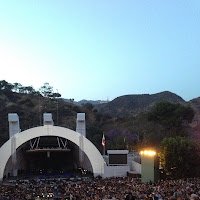 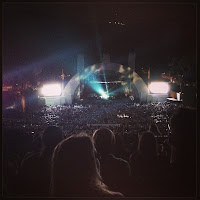 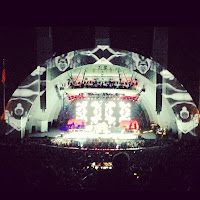 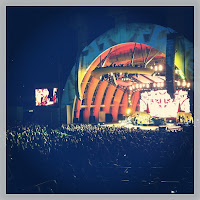 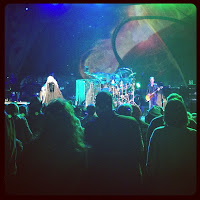 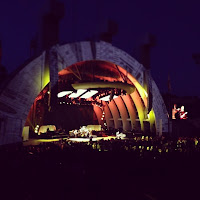 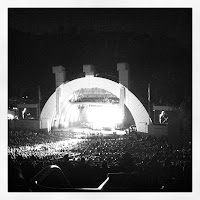 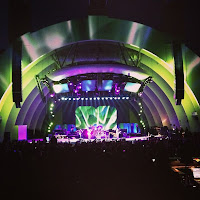 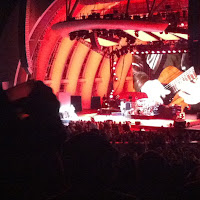 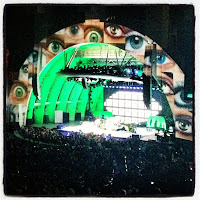 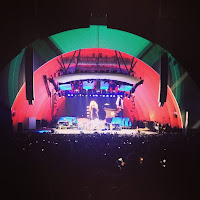 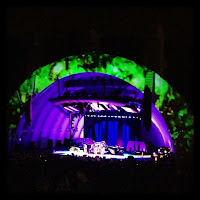 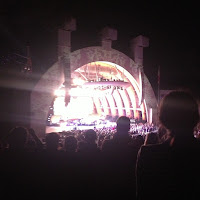