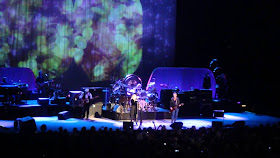 
The last time I saw a Fleetwood Mac concert was in 1979 on the heels of the last album of theirs that really mattered to me: Tusk, which for my money endures even more than the blockbuster Rumours.

Back then I was privileged to attend the band’s press conference that November at Manhattan’s St. Regis Hotel. Business matters, such as the then relatively high list price of $15.98 for the double album and why the album took so long to complete, dominated the proceedings. In response to the rumors that the bandmembers were on the verge of breaking up, bassist John McVie refuted that they were about to pack it in: “We’re doing all right, but I don’t see Fleetwood Mac in wheelchairs playing ‘Rhiannon.’”

Although the core don’t act their age (McVie, 68; Fleetwood, 66; Nicks, 65; and Buckingham, 64 this October), who thought that the Rolling Stones would be still be on the road?

Christine McVie was not at that 1979 press conference, nor is she on the current 49-date U.S. leg  of the tour wrapping up July 6, although she might very well “say hello” at two of the band’s O2 London dates in late September, Mick Fleetwood told some privy Live Nation fans who sprung for the VIP deluxe package.

The lanky drummer invited the fans to join him up on the stage at this meet-and-greet, and offered some tidbits, such as Charlie Watts is his favorite drummer, and the Rolling Stones would have been his dream band to join. He also is amazed how Charlie doesn’t appear to sweat while playing  a show. Fleetwood noted rather enviously that his good mate in Maui, Steven Tyler, is the same age as him.

More importantly, Fleetwood waxed poetically about how touching it has been on this latest tour from his vantage point, the drum kit perch, to watch the former high school sweethearts Lindsey Buckingham and Stevie Nicks bring out the best in each other musically, and leave their stormy past behind.

Fleetwood’s observation was evident on stage once the show started: they shared a genuine affection, and I’m hedging a guess that probably wasn’t the case during previous reunions, the most recent being 2009. This was most apparent when Nicks started rambling between songs about how they were asked to join Fleetwood Mac, and she asked Buckingham if she got the story right? He pointed out that she left out a key element to the story: Fleetwood called Buckingham to be their guitarist, and it was Lindsey who said the two of them were a package deal.

Stevie offered a belated thank you to her former boyfriend for insisting that they “take your hippie girlfriend too.” Nicks, wanting John McVie not be the forgotten man, said the bass player suggested back in ’75 gruffly that they “keep the girl.” And the rest is history, as they say.

The sound crew joked to me that they time Stevie’s story, which is repeated at every date on the current tour, and over 7 minutes it fell short of the previous record in Boston the night before. And yes, it all appeared to be a bit orchestrated, and in fact, the set list hadn’t changed since April show to show.

Musically, the band was in fine form during the 2 hour, 40-minute concert, particularly Buckingham’s cathartic acoustic guitar workout on “Big Love” and then again electric on “I’m So Afraid.” Nicks hit her high notes on “Sara” and “Gypsy.”

Playing a few songs from Tusk, including a punked-up “Not So Funny” and the percussion-heavy title track, Buckingham talked about how he would have loved to have been a fly on the wall to get the record company’s reaction to the album when they were expecting Rumours II. Knowing that the music holds up three decades later, he clearly feels vindicated.

Buckingham also made a point of noting that when they decided to go back on the road they felt it necessary to make some new music, and how proud they were of their recently released four-song EP. Two songs made it into the set, and while pleasant enough, it’s unlikely they’ll join the ranks of the FM hits.

And then it hit me, with her out of the band – which has been the case since 1998 – Buckingham and Nicks finally achieved what they wanted with their 1973 debut album before they joined Fleetwood Mac: showcase their own songs, with a tight rhythm section, without having to share the limelight with another quality songwriter.

No doubt Buckingham’s conundrum is his consistently great solo records generally can’t get him arrested, and in concert the solo act is relegated to theaters. Nicks is still an arena draw, although perhaps her records don’t sell as well as they should either.

The only catch is that they must use the “Fleetwood Mac” brand to bring in the punters.
Nickslive at Wednesday, June 26, 2013
Share