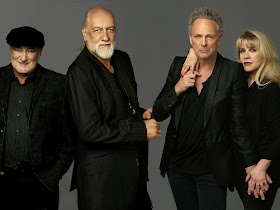 A number of Fleetwood Mac fans are upset after missing out on tickets to the band's two Auckland shows December 6th and December 7th.  Tickets went on sale at 9am (June 13th) and were sold out within minutes.

Fans have their fingers crossed for a third show.

Anger as fans miss out on Fleetwood tickets
Stuff.co.nz


Tickets to legendary rock band Fleetwood Mac sold out in 15 minutes after they went on sale this morning.

When sales opened at 9am there was a "phenomenal demand" for tickets to the two shows on 6 and 7 December at Auckland's Vector Arena.

Including the three rounds of special presales, all of the estimated 24,000 tickets were sold out by 9:15am.

There were no surprises the tickets sold so fast.

"Judging by the demand within the three pre sales, we were thrilled," said Bridget De Launey, publicist for the concert.

But not everyone was as happy. The huge demand created issues for the Ticketmaster website, leaving Fleetwood fans without tickets.

"The reservation of expensive tickets for premier customers means the real fans miss out," she said.

"Ticket purchasing should be fair for everyone despite the purchasing power of the fan. Why should we be penalised because we want the cheaper tickets?" Lewis said.

MICK FLEETWOOD VIP - MEET AND GREET TICKETS
This isn't really a solution but might be for some of you that didn't get tickets to either Auckland shows.

After the pre-sale started and after the general public sale began and eventually sold out for both shows. Mick Fleetwood put up his VIP Ticket Packages on his site to both shows at mickfleetwoodofficial.com

There are two pricing structures either $425 or $375 - both purchases include a meet and greet with Mick, PLUS you get a seat guaranteed either in the first 5 rows for the $425 or within the first 20 rows for the $375.  Trust me it's a cool experience, I did it myself.  When you consider a fairly decent ticket to the show is going to cost you $200 bucks anyway, the $425 or $375 isn't really that much more when you consider you get to meet Mick, go up on stage, get your photo taken with him and get that guaranteed seat in the front, which is highly sought after.  So if you have the extra funds and want a really neat experience, I highly recommend it.
Nickslive at Wednesday, June 12, 2013
Share