Kickstarter: The untold story of Waddy Wachtel, and the unsung heroes of Rock and Roll.

KING OF THE SIDEMEN

The untold story of Waddy Wachtel, and the unsung heroes of Rock and Roll.
This project will only be funded if at least $32,500 is pledged by Wednesday Jul 24, 5:03pm EDT.

They are the silhouettes on stage- far from the spotlight. Churning out the licks and holding down the beat- creating the musical magic that make the stars shine brighter.

They are the SIDEMEN... ...The unsung heroes of Rock and Roll.

These multi-talented virtuosos are some of the most sought-after musicians in the world. Yet, by playing exclusively in other people's bands, they are often unnoticed and under-appreciated.

This is their story, and we need your help to tell it.

From skid row bars to massive coliseums and legendary recording studios, a rock sidemen’s life is like a wild, unpredictable rollercoaster ride, with soaring highs sandwiched between deep lulls.

Some thrive- and maintain long-standing relationships with hugely popular musicians. Some barely scrape out a living. And others have faded away. But ONE has survived the pitfalls of the brutal music industry and remains as relevant today as when he his career began in the late 1960s.

WADDY WACHTEL’s resumé reads like a who’s who of rock and roll. He has played guitar on hundreds of hit records and has performed, recorded and collaborated with nearly every rock superstar imaginable, earning their respect and admiration along the way.

KING OF THE SIDEMEN is his story: a full-length documentary film that chronicles the struggles and successes of a rock-and-roll maestro and the making of some of the greatest songs ever recorded. The film spans his early days breaking into the business, to outrageous world tours with rock royalty, to Waddy’s pet project: the creation of an unlikely Supergroup made up of some of the best sidemen in the industry. The film documents the rise of one of rock’s greatest guns-for hire, with live performances from his band, vintage footage, personal photos, classic live and recorded music and exclusive interviews with rock icons including Keith Richards, Stevie Nicks, Mick Fleetwood, Jackson Browne, George Thorogood, Dave Stewart, Joe Walsh and more.

KING OF THE SIDEMEN includes the stories of the members of what may be the world’s greatest cover band: long-time Rolling Stones backup singer Bernard Fowler, guitarist and keyboardist Brett Tuggle (Fleetwood Mac), ex-Tom Petty drummer Phil Jones and Neil Young alum Rick “the bass player” Rosas, and others. They play to a packed house in an unassuming bar in Los Angeles. But this is no ordinary club. On any given night, legendary rockers like Robert Plant, Roger Daltry, Ron Wood, and Neil Young stop by to kick out the jams.

They may not have had all the glory, but the sidemen get what others dream about: the chance to rock with the best.

Stevie, Mick and Brett Tuggle appear in the documentary 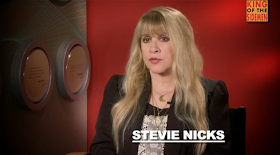 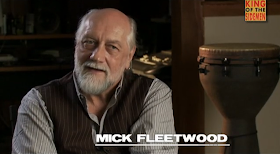