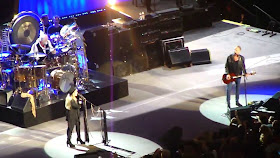 
Between festivals like Bonaroo and Firefly, to country-wide and world tours from artists such as Bruno Mars and the Dave Matthews Band, summer is overflowing with smash-hit concerts for every musical taste.

Fleetwood Mac is one of those bands on tour this summer, and The Echo was onsite during the group’s stop at the Nikon Jones Beach Theater in New York on June 22.

Skyrocketing to rock and roll fame in the 1970’s with their Grammy-winning album Rumours, songs from the legendary album were featured heavily throughout the night. Nicks, who penned many of the hits from the album, kept to her gypsy persona, dancing across the stage wearing platform boots, flowy skirts and a top hat.

As she welcomed the audience to the show she exclaimed, “Let’s get this party started!” and began singing the band’s number one hit, “Dreams.” The amphitheater, which is located on a beach, gave lyrics such as “drowning in the sea of love” new meaning.

Some highlights of the night included Nicks’ and Lindsey Buckingham’s acoustic duet of “Landslide,” a song many artists have covered over the years due to its cross-generational lyrics. As the giant screen behind the stage sparkled with twinkling lights, Nicks and Buckingham’s famous chemistry exploded onstage.

Nicks and Buckingham surprised superfans with “Without You,” a song written before they were asked to join the band. Nicks’ enthusiasts got their fill as well, with hits written for the band such as “Rhiannon,” “Gypsy” and a rousing rendition of “Stand Back” from her solo career.

Buckingham showcased his unique plucking style of guitar playing with solos during “Go Your Own Way,” even wiping out onstage during his solo in “I’m So Afraid.” Thankfully he got right back up and kept shredding on his axe.

As Buckingham explained some of the meaning behind his lyrics, he spoke about the importance of transition.

Mick Fleetwood, drummer and original founder of the band, showed he hasn’t lost his touch despite turning 66 years old on Monday. In between the first of two encores, Fleetwood, sitting on what the band has dubbed “his throne,” went into an impressive drum solo.

Despite the absence of Christine McVie, songwriter of “Don’t Stop” and former piano player for the band, the song still had the same energy as ever, turning into a giant audience sing-along.

The Mac still had one more trick up their sleeves. “Silver Springs,” a Nicks song originally intended for the Rumours album, has become a crowd favorite and was the second-to-last encore.

Before the band closed with “Say Goodbye,” Nicks left the audience with some parting words.