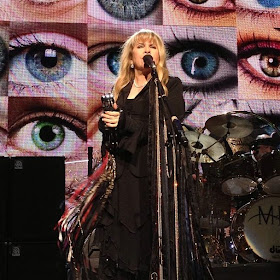 
MANSFIELD, Mass. — Lindsey Buckingham and Stevie Nicks are to classic rock what George Jones and Tammy Wynette were to country music and Marvin Gaye and Tammi Terrell were to rhythm and blues: the everlasting couple.

Though in real life the Buckingham-Nicks romance flamed out long ago, its myth still fed Fleetwood Mac’s nostalgia-laden concert at the Comcast Center on Friday.

After founders Mick Fleetwood and John McVie, plus the hired guns, took the stage, Nicks and Buckingham walked out hand-in-hand to start the show with “Second Hand News.”

Drummer Fleetwood, bassist McVie, and guitarist Buckingham easily recreated their parts from Fleetwood Mac’s mid-70s glory days. Nicks, still the high-priestess of romantic souls, has far less range and power in her vocals. She did not struggle through “The Chain,” “Dreams” or “Rhiannon,” but she also did not deliver those songs with any sort of spark. Applauding her efforts felt more like cheering for memories than finding life in the moment.

Fleetwood Mac can still orchestrate a brisk 21/2-hour concert. After a run through early hits, Buckingham introduced “Sad Angel,” one of two new songs included in the concert. That up-tempo number was far better than the hippie-lite wobble “Without You,” a song Nicks wrote in 1970 and introduced in a story that would have been tolerable at “rambling” but went on to tortuous lengths. Both songs fed the romance storyline in different ways, as did the Buckingham-Nicks embrace at the end of “Sara.”

Buckingham introduced a suite of songs — including “Sara — from the “Tusk” album with a speech about taking artistic risks, which that album was when it followed the monolithic “Fleetwood Mac” and “Rumours” albums. Of course the merits of artistic risk were on display when people streamed toward the concession stands when Buckingham began the “Tusk” deep cut “Not That Funny.” But a turn into that album’s “Sisters of the Moon” proved a treat to older fans, with Nicks noting the song hadn’t been part of the concert repertoire since 1981.

A mid-concert turn into stripped-down acoustic material was a highlight.

Buckingham launched it with “Big Love,” brought it to a peak when he and Nicks aired “Landslide” and gently brought it down with a duo reading of “Never Going Back Again.”

Late into the concert, Nicks and Buckingham each stretched out on theatrical numbers. Nicks went first with an extended “Gold Dust Woman.” Buckingham followed with his tightly-coiled “I’m So Afraid.”

Though Nicks is not the powerhouse she once was, she still has commercial clout, as the band followed her through her solo hit “Stand Back.”

Fleetwood Mac wrapped up its main set with “Go Your Own Way.” The encore portion contained the requisite Fleetwood drum solo (though shortened from past tours).

The final song was “Say Goodbye,” done with just Buckingham and Nicks harmonizing alone on stage, looking very much like a love story to be continued as long as there is an audience for it.