It took all of 60 seconds for Fleetwood Mac to roll back a lot of years at Joe Louis Arena.


In a 2-hour, 40-minute set that showed the harmonies were still intuitive, the bonds still tight, the songs still timeless, the veteran pop-rock outfit played a mature but energetic set to an adoring sellout crowd of about 15,000 Wednesday night. It was the group’s first Michigan show in four years.

On this 35th anniversary of the era-defining “Rumours,” the band rolled into an early stretch that was heavy on that 1977 material: a brisk “Secondhand News,” a blues-laced “The Chain,” a lush “Dreams.”

Only Christine McVie was missing from a lineup whose characters remain distinctively sketched — the cool craftsman Lindsey Buckingham, the enchantress Stevie Nicks, the dapper bassist John McVie, the wild-eyed Mick Fleetwood. Backing the band were a pair of singers and utility musicians on guitar and keyboards, as McVie got cited in spirit via material such as “Don’t Stop.”

“It would seem there are quite a few chapters left in the book of Fleetwood Mac,” Buckingham told the crowd early on, during one of several talkative interludes that found band members reminiscing, reflecting and taking stock of their nearly four-decade journey.

As the voices of Buckingham and Nicks locked together on numbers such as “Rhiannon,” the amiable ex-lovers displayed the tightly wound harmonies that became one of modern pop music’s most distinctive sounds.

It wasn’t just a rote run through the hits: The band was particularly engaged with a mid-show journey through the more challenging material of “Tusk,” and Buckingham’s spare, intense reworkings of “Big Love” and “Never Going Back Again” were showstoppers. With his lithe, expressive guitar lines, the 63-year-old reaffirmed his status as one of rock’s great underrated players.

Nicks, her microphone draped in gold and black tassels, had her own sterling moments, including the arena sing-along of “Landslide” and a gorgeous “Silver Springs” late in the show. Even as she occasionally backed away from the high notes, Nicks remained a compelling figure at center stage, emphasizing the give-and-take of artist and audience as she told the crowd late in the show that “you guys are the dream-catchers.”

The emotional energy grew as a blazing “Go Your Own Way” closed out the regular set, followed by an encore that included a typically feisty Mick Fleetwood drum solo and finished with a warm and sparkling “Say Goodbye.” It was a stirring, soaring night from a band that still knows how to seduce its audience.

SISTERS OF THE MOON
GO YOUR OWN WAY 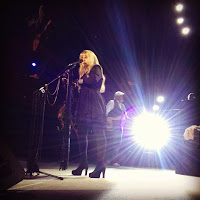 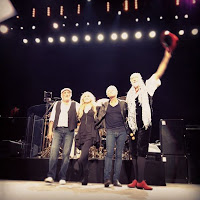 Above Photos by Alison Streaker