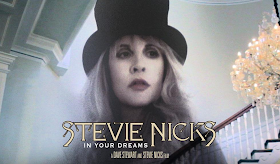 By Carla Meyer
The Sacramento Bee

But she has not slowed down, or rather, further slowed down while spinning at a deliberate speed to better display her shawl.

Nicks looks like she's in her mid-50s, tops, and she still tours with Fleetwood Mac (minus Christine McVie, for purists), performing Saturday at Sacramento's Sleep Train Arena.


In 2011, Nicks released the finely crafted "In Your Dreams," her first solo album in 10 years. A
documentary, "Stevie Nicks: In Your Dreams," released on video on demand this week, charts the album's making. The film was directed by Nicks and Dave Stewart, the ex-Eurythmics member and Nicks' collaborator on the album.

They recorded much of the album and shot most of the film in Nicks' huge Southern California house, which appears to have been built in the 1920s. Though the house is accented by the occasional dream-catcher or goddess painting, it is unexpectedly airy and bright, without a scarf-covered lamp in sight.

Nicks comes off as decisive but good-humored. She's clearly fond of Stewart, and vice versa, and she's also fiercely loyal to her friends and longtime musical collaborators, including Mick Fleetwood, who played drums on "In Your Dreams."

Nicks tells the stories behind her songs, inspired by such diverse yet Goth-friendly sources as Edgar Allan Poe and the "Twilight" movies, and by past romances, of course.

Nicks always has happily spilled about her love life dovetailing with her art, as those of us who sat rapt during the Nicks and Fleetwood Mac episodes of VH1's "Behind the Music" can attest. She's a bit too coy about names in the documentary, but with age comes discretion, alas.

Here are 10 things to know about Stephanie Lynn Nicks' life, career and impact on the world. The list is based on the documentary, other Nicks interviews and observation:

1. Nicks hails from the mystic provinces of Phoenix and Palo Alto. She also attended Arcadia High School, near Pasadena. Her family moved often to accommodate her corporate-executive father's career. Jess Nicks became president of Greyhound. As a young woman, Nicks carried a bus pass that took her to any Greyhound destination for free.

2. Though Nicks' success did not popularize "Stevie" as a diminutive for Stephanie, as one might expect, a Nicks-written 1975 Fleetwood Mac hit became a baby-name inspiration. Try entering any college-town coffee house or vegetarian restaurant without smacking into a Rhiannon.

3. Nicks sported the best rock-woman hairdo of all time during Fleetwood Mac's 1979 "Tusk" tour: Curly short bangs fronting a giant bun. That single hairstyle embodied late 1970s America, from disco to the fight for the Equal Rights Amendment – it was party in front, suffragist in back.

4. The Nicks-Stewart composition "Everybody Loves You" from "In Your Dreams" is based on their shared experience of becoming famous in groups with former romantic partners. Stewart and Annie Lennox broke up before hitting it big in Eurythmics, just as Nicks and Lindsey Buckingham broke up before the mega-selling 1977 Fleetwood Mac album "Rumours."

5. Nicks sings Christine McVie's parts on "Don't Stop (Thinking About Tomorrow)" on Fleetwood Mac's current tour. No, it's not the same.

6. Nicks once stole a song from Tom Petty. Petty's guitarist, Mike Campbell, writes songs for Petty and Nicks. Nicks tells a story in the documentary about accidentally leaving Petty's house with a demo tape of Campbell instrumentals.

She loved one track so much she wrote lyrics for it and recorded the song with Fleetwood Mac. Petty called her, and she proudly played him the new song over the phone. Petty flipped out, telling her the song was for his band. Fleetwood Mac killed their track, and the song became "Runaway Trains" from the 1987 Tom Petty & the Heartbreakers album "Let Me Up (I've Had Enough)".

7. Nicks' backup singers Sharon Celani and Lori Perry Nicks have been with her since 1979. Perry married Nicks' brother, Chris, in the '80s. Celani and Lori Nicks also tour with Fleetwood Mac.

8. Her romances with Buckingham and Mick Fleetwood are more famous, but Nicks also dated Jimmy Iovine, who later co-founded Interscope Records.
Iovine produced Nicks' first solo album, 1981's "Bella Donna." Many people believe that album's "Edge of Seventeen" details her relationship with Buckingham, whom Nicks met in high school. But Nicks has said it's inspired by Iovine, well past age 16 when they met.

9. In the documentary, shot three years ago, Reese Witherspoon visits Nicks in the recording studio. Nicks says Witherspoon should play her in a film biopic of Nicks' life. But Nicks told a reporter earlier this year that Witherspoon, 37, is now "almost too old" to play Nicks, who rose to fame in her late 20s, and that Witherspoon agreed. A good candidate: Brittany Snow, 27, from "Pitch Perfect." She can sing and shows plenty of sass.

10. Nicks is a Twihard. In the documentary, Nicks recalls seeing "Twilight: New Moon" while on tour with Fleetwood Mac. When the vampire Edward leaves human Bella, Nicks could relate to her pain, she said, because she's been left like that.

"I became forever entrenched in the 'Twilight' story," Nicks said.