Gold Dust Woman "the perfect atmosphere for Stevie Nicks, who weaved a spell on the audience with her hypnotic vocal" 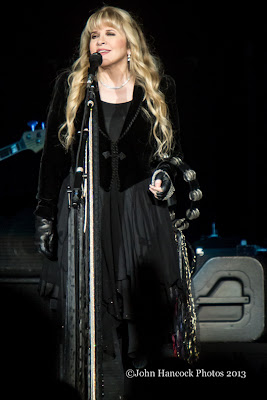 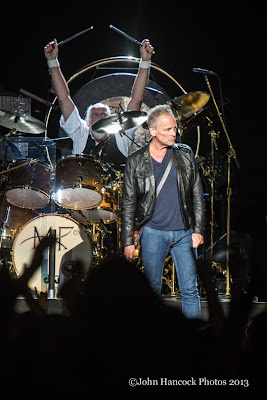 "But time makes you bolder/Children get older/I'm getting older, too," Stevie Nicks gently sang during "Landslide" as a stoic Lindsey Buckingham plucked the song's familiar acoustic guitar accompaniment. On July 5 at Viejas Arena in San Diego, this particular Fleetwood Mac classic seemed to take on added meaning with each band member now north of age 60.

Despite the sobering reality of human mortality, the music of Fleetwood Mac stood timeless on this breezy summer evening as attendees swooned and sang along for the balance of a two-hour-plus set adorned with plenty of soft-rock jewels.

Right out of the gate, the quartet — Buckingham, Nicks, drummer Mick Fleetwood, and bassist John McVie — brandished three selections from their 1977 GRAMMY-winning opus, Rumours: "Second Hand News," "The Chain" and "Dreams." "Listen carefully to the sound of your loneliness, like a heartbeat," Nicks sang with a fiery urgency during "Dreams," the painful tale of the long-ago demise of her and Buckingham's explosive relationship.

Buckingham countered with plenty of his own sparks throughout the evening. The energetic musical maverick showed a complete command of his instrument, whether wielding delicate chordal sequences, summoning haunting melodies, strumming relentlessly, or losing himself in a chasm of improvisation on songs such as "I'm So Afraid" from 1975's Fleetwood Mac. Solo performances such as the bombastic "Big Love" and the rubato-styled "Never Going Back Again" provided shining examples of his quirky songwriting sensibility and impressive fingerstyle technique.

Dressed in all black, Nicks swirled and twirled gracefully across the stage, her distinctive voice filling the arena during songs such as "Rhiannon," "Sisters Of The Moon" and "Gypsy." Following a seductive performance of "Sara," the last of four numbers from 1979's Tusk, Nicks and Buckingham shared a warm embrace, one of the many outward signs of affection the two former lovers displayed onstage.

Not content to rely on their hits, the band also drew two songs from their recently released Extended Play EP, including "Sad Angel," a crisp Buckingham/Nicks duet with a melody befitting the song's title.

While Buckingham and Nicks exuded the star power, the understated duo of McVie and Fleetwood provided the rhythmic foundation with the precision of a finely tuned timepiece. The band also benefited from a troupe of four musicians who added instrumentation, background vocals and an extra layer of depth. (They were also perhaps a tacit reminder of the chair vacated by the angelic-voiced Christine McVie.)

The entire ensemble climaxed during a 10-minute-plus performance of Rumours' epic final track, "Gold Dust Woman." A sea of rich gold lighting enveloped the stage as Fleetwood's tribal beat, McVie's thundering bass and Buckingham's spooky harmonic framework created the perfect atmosphere for Nicks, who weaved a spell on the audience with her hypnotic vocal.

GOLD DUST WOMAN
Love how she incorporates, by title and I'm sure by theme, the song "You Can't Fix This"

Thanks Jamie for capturing this!


Fleetwood Mac were welcomed back for no less than four emotional encore performances, including the upbeat "Don't Stop," the lovely yet mournful "Silver Springs" and the melancholy "Say Goodbye," a gem from 2003's Say You Will. The band members appeared genuinely moved by the audience's constant shower of adoration. In particular, Nicks thanked attendees for their support as she announced this concert was the penultimate date of their U.S. tour, which began in April.

"There are still quite a few chapters left in the book of Fleetwood Mac," Buckingham later added, as if to stave off the palpable bittersweet sense in the room.

Finally, the specter of mortality had seemingly all but evaporated when Fleetwood exclaimed before leaving the stage, "The Mac is back!"