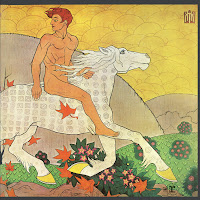 
The newest edition of Then Play On, the definitive studio recording by the Peter Green-era Fleetwood Mac, ends with a subtle guitar instrumental titled World in Harmony.

The music blooms from sparse, autumnal ambience into a summery, almost country-esque serenade. It's a quiet study in harmony and conflict, opposites that always seem to surface when Fleetwood Mac is at its best.

Named after the oft-quoted opening to Shakespeare's Twelfth Night ("If music be the food of love, play on"), the album is a masterwork that faded from view as the band shot to pop stardom in the mid-'70s with the addition of Lindsey Buckingham and Stevie Nicks. But Then Play On, Fleetwood Mac's third studio work, takes us back to 1969 and remains a portrait of lost rock 'n' roll innocence. It was the first record to feature co-guitarist Danny Kirwan and the last to include band founder Green. The band's third guitarist, Jeremy Spencer, is curiously absent from the recording.


This new version differs from most archival reissues. While there are four bonus tracks, three of them (the slo-mo guitar romp The Green Manalishi and the two-part boogiefest-turned-folk meditation Oh Well) were Green-penned singles that stand as the early Mac's signature tunes. Only World in Harmony (Manalishi's b-side) is evenly remotely obscure.

What this new edition accomplishes, though, is to gather all the material issued on various truncated British and American versions of Then Play On. The basic running order matches the original British release with the singles tacked as a postscript.

Still, it's the nuts-and-bolts design of the music that makes the album so extraordinary — specifically, the giving way of the blues roots foundation that brought Fleetwood Mac to life in favor of looser, more introspective portraits from Green and Kirwan. It rocks quite handsomely at times (on Green's Rattleshake Snake and on the first part of Oh Well) but often eases into leaner, less defined lyricism that propels the instrumental Under Way and the neo-poppish My Dream which suggest the calmer melodic waters to come in the post-Green years. Even more overt blues pieces such as Like Crying present Green and Kirwan in casual sympatico without a full rhythm section. Such songs sound, blissfully, like rehearsals.

Kirwan plays the role of disciple to Green throughout Then Play On. His Although the Sun is Shining is a beautifully weathered shadow of vintage Brit-pop — a bit of folky romanticism laced with a touch of low-fi psychedelia.

But the farewell Green leaves us with is a stunner, Before the Beginning. Its lyrics are as restless, wispy and forlorn as its superbly crafted guitar melodies, all of which are underscored by a disquieting drum rattle from Mick Fleetwood. It is a spellbinding coda to Fleetwood Mac's most underappreciated triumph.