Fleeting Inspiration: The Invincible Fleetwood Mac are back... and the kids think they're alright. 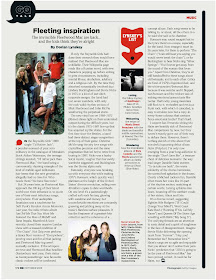 In the Reynolds Girls 1989 single "I'd Rather Jack", a peculiar moment of year zero militancy in the catalogue of hitmakers Stock Aitken Waterman, the teenage siblings insisted, "I'd rather jack than Fleetwood Mac," the band being a conveniently rhyming example of the kind of middle-aged millionaire has-beens that the rave generation allegedly had no time for.  Who needs them?  We have Yazz now!

But 24 years later, as Fleetwood Mac approach the UK leg of their latest world tour, their influence is, to quote one of their most infectious songs, everywhere.  Their audiophile fanaticism was a touchstone for Daft Punk's Random Access Memories.  Last year, the indie tribute album Just Tell Me That You Want Me featured the likes of MGMT and Tame Impala. Mumford & Sons recently closed their massive London show with a massed rendition of "The Chain". Hot Chip even perform a dance floor version of "Everywhere", proving once and for all that jacking and Fleetwood Mac-ing aren't mutually exclusive.  If the whispers are true and Fleetwood Mac headline Glastonbury next year, their status as twenty-somethings' new favourite classic rockers will be confirmed.

If only the Reynolds Girls had done their research they would have realised that Fleetwood Mac are unkillable. Their wikipedia page reads like a Russian novel, with new characters popping up before exiting in grim circumstances, including mental illness, alcoholism, adultery and religious cult.  By the time they absorbed romantically involved duo Lindsey Buckingham and Stevie Nicks in 1975 in a kind of last-ditch corporate merger, the band had lost seven members, with only the rock-solid rhythm section of Mick Fleetwood and John McVie weathering the perpetual storm.

The new vinyl box set 1969-1972 (Rhino) shines light on their underrated output during the difficult years, but it's the classic 1975-1987 line-up that has acquired mythic status.  For the first time since the Beatles, a band had three distinct singer-songwriters at the top of their game.


Christine McVie sang the airy love songs with crystalline precision and
the same pragmatism that led her to retire from touring in 1997;
Nicks was a husky SoCal mystic, tougher than her swirly wardrobe
suggested; and Buckingham was the thorny alpha male.

Famously, everyone was breaking up with everyone else while making 1977's Rumours, which quickly went platinum at the height of the United States' divorce revolution, selling over 40 million copies to date worldwide.  On one level it's a painstakingly crafted soft-rock fantasy, glowing with sunshine and money, but uncomfortable emotions are constantly gnawing and jabbing away at the music's flawless surface pleasures. It has the firepower of a greatest-hits collection and the coherence of a concept album.  Each song seems to be talking to, or about, all the others in a he-said-she-said echo chamber.


Critics are fond of 1979's disjointed Tusk, and the white-powder Fleetwood Mac because it was weirder and it flopped, but Rumours aced the trickier task of making emotional poison taste like nectar.

Rumours may sound escapist but in the lyrics there's no escape, especially for the band.  How strange it must be, 36 years later for them to perform "The Chain" ("I can still hear you saying you would never break the chain"), or for Buckingham to hear Nicks sing "Silver Springs". "You'll never get away from the sound of the woman that loves you."  Apart from Christine, they're all still handcuffed to these songs about old betrayals, and to each other.  Critics are fond of 1979's disjointed Tusk, and the white-powder Fleetwood Mac because it was weirder and it flopped, but Rumours aced the trickier task of making emotional poison taste like nectar.  That's why young musicians still flock to it, enthralled and envious.  Punk rock, with which it coincided, is easy to emulate now but a copy-in-every-home colossus that contains fierce emotional truths?  That's hard.

I suspect San Fernando sibling trio Haim are heartily sick of Fleetwood Mac comparisons by now, but they haven't exactly gone out of their way to defuse them.  However, there's nothing slavish or trite about their wonderful upcoming debut album Haim (Polydor). I'm only now emerging from a year-long addiction to the single "Don't Save Me", a treasure chest of delicious moments: the way lead singer Danielle Haim stutters "Ta-ta-take me back", the warm solidarity of the chorus harmonies, the unresolved agitation in the drums. Clearly a Michael Jason fan, Danielle often treats her voice like it's part of the rhythm section, snatching at certain words, turning syllables into beats, bouncing off the eathier vocals of her sisters, Alan and Este.

It's a diverse record, suggesting Eighties Nile Rodgers ("If I Could Change Your Mind"), West Coast Kate Bush ("Running If You Call My Name") and Queens Of The Stone Age wrestling with R&B ("My Song 5").  The unifying threads are an attention to sonic detail and a spirit of toughness in the face of disappointment.  Imagine Stevie Nicks delivering the opening taunt from "Forever": "Hey You! Remember me?  Remember love?"

Haims songs are so agile and enjoyalbe that you almost don't notice their pain.

Nicks' prediction that "2013 is going to be the year of Fleetwood Mac" has been proved correct.  It could be for Haim, too.
Nickslive at Wednesday, September 11, 2013
Share