Heartbreaking story about how the song "Golden" touched Stevie Nicks 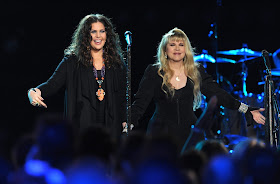 The idea of collaborating on each others' songs came by way of a dream, the Fleetwood Mac singer tells THR.

If you tune in to the new episode of CMT Crossroads, which has Stevie Nicks and Lady Antebellum as its latest cross-genre pairing, you’ll hear a version of “Rhiannon” that almost sounds more like Fleetwood Mac’s original version than Fleetwood Mac could do.

Perhaps we should let Stevie explain…

“I gave Hillary (Scott) that high part in ‘Rhiannon’ because I don’t sing it that way on stage -- because I can’t reach that note,” Nicks tells The Hollywood Reporter. “I reached it once: the day we recorded the song in 1977. I thought, you know what, if we’re gonna do this, wouldn’t it be great to actually have her sing the real melody of ‘Rhiannon.’ Because it has not been sung since it was written!”

That’s not to say that Nicks took the lazy way out, long-abandoned high notes excepted. CMT producers say they’ve never had a guest from the rock world approach a Crossroads taping with quite as much preparation or work ethic as the FM mainstay. And this particular coupling was Nicks’ own idea, coming out of a dream she had where she was cheating on Lindsey Buckingham, musically speaking.

“The dream was very short,” Nicks says. “And the dream was actually very fun. But I just want to clarify that so that when my other half hears this” (by “other half,” she means her professional partner Buckingham), “he doesn’t get all pissed off, because it wasn’t that kind of a dream. We were just having our usual little disagreement [in the dream], because that’s what we do. And I laughingly said to him, ‘Well, fine. I’ll just go join Lady Antebellum.’ And then the dream ended, and I sat up, and there it was.”

Nicks didn’t think much more about this nocturnal prophecy until three days later, when she went to the premiere of a Led Zeppelin concert movie and was approached by Bill Flanagan, a longtime producer for MTV Networks specials, who asked her for the umpteenth time if she’d be willing to do a Crossroads.
Much to his shock, she said she could fit it in right before rehearsal started for this year’s Fleetwood Mac tour. And before he could start listing potential names, Nicks told him about how Lady Antebellum had just popped up in her rapid-eye-movement revelation.


For Lady A, it didn’t matter that Rumours came out before they were born; there wasn’t much homework required. “We didn’t have to listen -- we already knew,” says Charles Kelley, who maintains that translating Nicks’ classics from their collective memory into band recreations was a cinch.

Nicks had more research to do, since she admits she was only familiar with a handful of Lady A’s tunes at the time of inception. “I knew the ones I’d heard on the radio -- because I still do listen to radio -- like ‘Need You Now’ and ‘Just a Kiss.’ And then I found ‘Cold as Stone,’ which I loved, because I love that kind of Appalachian sound. I also loved ‘We Own the Night’ and ‘Love Don’t Live Here Anymore,’ and I even learned ‘Downtown,’ so I just kept adding, until my list became ridiculous. Then I watched one of the Crossroads shows where they only had a total of four or five songs, and I was thinking, this is not going to work for us.”

In the end, Crossroads is airing a total of seven songs on the telecast -- far fewer than the two acts prepared or even shot, but still a hefty helping. They join forces on Nicks’ “Landslide,” “Edge of Seventeen,” “Stop Draggin’ My Heart Around,” and “Rhiannon” as well as Lady A’s “Need You Now,” “Love Don’t Live Here Anymore,” and “Golden.” (Their joint version of “Just a Kiss” was a highlight at the January taping, with Nicks’ added harmony making the country ballad feel more complete than it ever had before, but for whatever reason, CMT cut it from the broadcast.)

When they do Lady A’s multiple Grammy-winning smash “Need You Now,” Nicks opens the tune by duplicating the spoken-word phone call monologue that begins the original recording. The band didn’t know Nicks was going to do that, and you can see Scott cracking up over the surprise. They did a subsequent retake that nixed Nicks’ unexpected recitation, but fortunately, producers went with the first version that included Stevie going whole-hog with the song’s drunk-dialing motif.

Nicks spent two months absorbing all of Lady A’s albums before she ever got on the phone with the group to start making definite plans. “By the time I talked with them, I had listened to the music for so many days in a row that I really felt like I had known them for a hundred years,” she says. “So it was really one of those fun phone calls where it felt like we were friends forever.”

“The connection made in those calls was just priceless,” agrees Scott, “and the way it allowed us to build a relationship was reflected, I think, once we hit the stage. You can tell when you watch one of these if they don’t know each other or if they do.” But, she hastens to add, the actual rehearsals were “hard work.”

“And we were standing the whole time,” says Nicks. “And Hillary was pregnant, and standing up -- for like eight hours a day for three solid days, standing on concrete. I almost always sit in my chair when I’m rehearsing. But I said to Hillary, ‘We’re better off to stand and sing, because if we sit, you’re all like this’” -- at which point she adopts a scrunched-up posture that might indeed be uncomfortable for a performer who is in a family way. “Plus, I felt like we just had way too much work to do to actually sit. It was a very ambitious project that we took on. Fleetwood Mac went into rehearsal around the 15th of February, and our first date was in the middle of April, so we were rehearsing for six weeks, five days a week, six or seven hours a day… and all of those are songs that we already know!”

The one song they ended up doing together from Lady Antebellum’s new album, Golden, wasn’t the hit “Downtown” -- even though Nicks learned it -- but the more subdued title track.

As Kelley explains it, “There’s this one part in ‘Golden’ where we totally kind of take a Crosby, Stills & Nash little moment on the bridge. And she had referenced them when we were on the phone with her, saying, ‘You know what I love about your three-part harmony is, it reminds me a lot of Crosby, Stills & Nash.’ And I go, ‘Aw, man, I just have to send you this song. Maybe we can almost recreate a Crosby, Stills, Nash & Young thing, with a four-part harmony moment. So we send this song, and when we met her she had this really great, heartbreaking story about how the song had touched her.”

Elaborates Nicks: “I’m in my beautiful little bathroom in my condo that took me a year to complete. It’s a little white jewel box room. I’m in there and I get the song and I play it once, and I start to cry. My best friend from the 7th and 8th grade, when I lived in Salt Lake, has a daughter who has a brain tumor, and she has golden, curly hair. The song was on repeat, and it started again, and she walked in, and I just put my arms around her and held her really tight and just really sobbed for the whole four minutes of the song. Because she is golden, and I just wanted to put every bit of energy I had into this girl, because she’s facing an extremely tough battle.

“And then the night before she had surgery at UCLA,” says Nicks, “I wrote out the words for her, and I wrote ‘Just remember you are that golden lion, and just remember that you are a warrior queen. And when they put you to sleep, remember to fight, and remember how golden you are.’ And I think it helped her, and she came through the surgery really well. She is the little girl in ‘Golden.’ So I know that song is going to reach out and make people drop to their knees.”

The Nicks/Lady A Crossroads premiered Friday, Sept. 13 on CMT, with repeats set for Saturday and Sunday (check local listings).