"Performing with Stevie Nicks is by far the coolest thing we have ever done in our career," - Lady A's Charles Kelley

Lady Antebellum may be on hiatus, but fans are still getting a chance to see something new from the Nashville trio.

Lady A will join Stevie Nicks on Friday night's episode of "CMT Crossroads," the show that matches country stars with partners from different musical genres.

"Performing with Stevie Nicks is by far the coolest thing we have ever done in our career," Lady A's Charles Kelley said. "I mean, it really was. We are actually going to have a little viewing party at my house that night because we're just excited."

CMT recorded the performance last spring in Los Angeles before Lady A singer Hillary Scott gave birth to her first child this summer. The group has been on a break for two months and won't return to the road till later this year.

The show airs 10 p.m. EDT and pairs the trio with Nicks, a member of Fleetwood Mac, a group Lady A is often compared to because of its use of harmony. The singers will tackle songs from the catalogs of each, including "Rhiannon," ''Stop Draggin' My Heart Around" and "Need You Now."

"I mean, honestly, it really was one of those collaborations that I think if we had to put five names on a list, you know, who would have been on it?" Kelley said. "I mean, dream lists, Paul McCartney, Tom Petty and Stevie Nicks would have been in that five. So the fact that it was her idea and she came to us about it was even cooler." 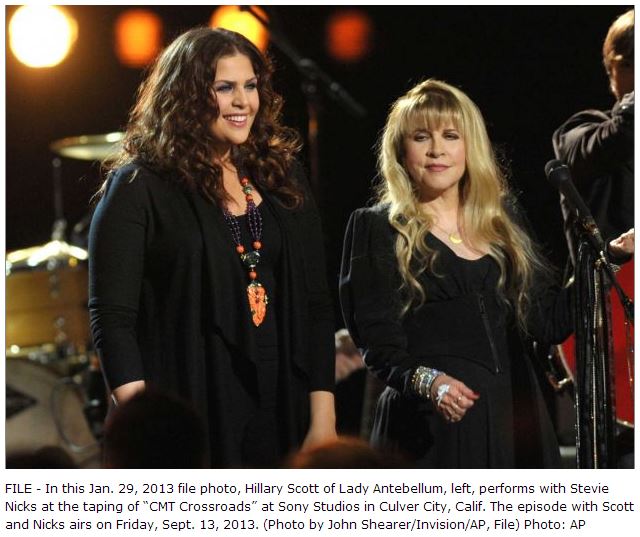