Here's what we know about Dublin - night #1

- Christine McVie did NOT perform with Fleetwood Mac tonight in Dublin - But there's always tomorrow.
- No change to the setlist vs the North American setlist.
- Tour Books are now available at the Merchandise stands - filled with lots of live shots taken during the North American leg of the tour.
- The Irish had a good time!

“The Mac… Is Back”…
BY MARTY MILLER
Radio Nova


…screams Mick Fleetwood in his very fine and grand British accent which after so many years on the other side of the Atlantic shows no signs of softening.

With that he turns and walks off stage wearing a red top hat… And that was that.

Fleetwood Mac had indeed been back! For just under 3 hours!

Dublin is the first stop of their European tour and the O2 was jumping from start top finish.

The show does take a bit of a “storytellers” feel at times with some story telling and even friendly banter/arguing from Stevie Nicks & Lindsey Buckingham. (They’re just GOOD friends!)

I won’t go into setlists, but you will not be disappointed.

There are some really nice acoustic moments in the middle with Lindsey alone on stage giving his all.. including some great “blue steel” looks straight into the spotlight!

Expect one or two new tunes, some solo Stevie, some solo Mick and not one word from John McVie! Oh, Saturday goers could have that ‘surprise’ appearance from Christine Mc to look forward to.

The band seemed genuinely thrilled to play our capital city again, very appreciative of us coming out and  spending our hard earned on tickets for their show and they put one on!

Clocking about 2 hours 55 mins, it does end on a quiet note with Stevie and Lindsey playing ‘Say Goodbye’, acoustically, which Lindsey wrote for Stevie, after everything they had been through as a couple and as bandmates.

Here's an example of one of the covers of the tour book.. Note that they flipped Mick and John around. 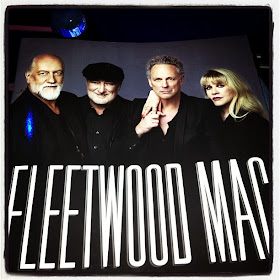 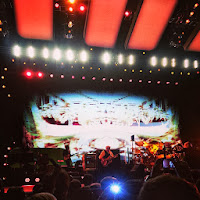 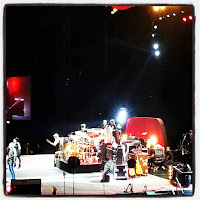 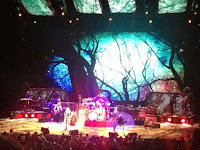 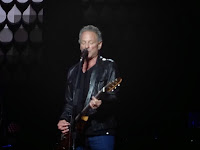