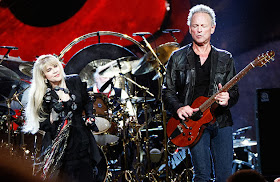 She’s a drama queen and she knows it. But we love Stevie Nicks all the more for it. At 65, this hot hippie is still able to hold an audience spell-bound.

It’s the perfect couples night out – with Nicks keeping the mid-life crisis men enthralled and Lindsey Buckingham, a very youthful 62, looking hot in his skinny jeans and leather jacket.

“I think Dublin is the best place to start up again after 47 shows in the US,” says Nicks, and we really believe her.

This could easily be dubbed a Greatest Hits tour – such is the outpouring of chart successes over five decades, with staples, ‘Gypsy’, ‘Tusk’ and ‘The Chain’ all featuring in a song list of favourites, with just a few gentle nods at more recent recording sessions.

The bizarrely complicated love triangles and trysts the members of Fleetwood Mac engaged in down the years have been played out in public, but neither Buckingham nor Nicks seem able to let it go. In what seems an almost therapeutic sharing with the 13,000-strong sell-out audience, the duo reference the troubles in their past several times over. Could they be wearing the band’s dysfunctional history as a badge of rock honour?

It seems almost distasteful at times — to die-hard fans it’s unnecessary, and to new fans it’s irrelevant. There are rumours of the one missing member of the original line-up – Christine McVie – joining them in London later this week, but one wonders if she’d really want to listen to old coals being raked in public again.

Drama aside, the show had a wonderful feelgood factor – with highlights including Nicks’ dedication of ‘Landslide’ to Guinness master brewer Fergal Murray, and Mick Fleetwood’s frenzied drum solos which seem unwittingly inspired by The Muppets’ Animal.

As the set finishes with ‘Say Goodbye’, an almost tearful Nicks thanks us for being ‘dream catchers’ and implores us to go out into the night and spread the love – proving she’s still that 70s hippie at heart.