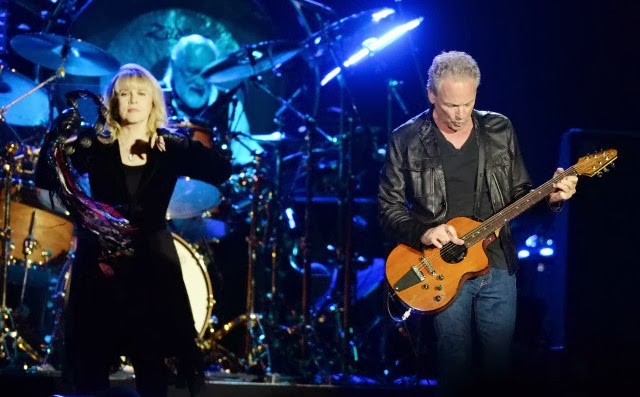 by Michael Hann
The Guardian


Those who have watched just a small selection of the many documentaries about Fleetwood Mac will know their two singer-songwriters, Lindsey Buckingham and Stevie Nicks, don't have a lot to do with each other. In one, Nicks said she'd never even been to her ex's house. But the narrative of the group insists they must forever be remembered as the tragic, star-crossed lovers, and so they are last on stage at the O2, strolling on hand in hand; during Sara they coo choruses to each other, then embrace and slow dance as the song comes to an end.

What makes this forced intimacy even odder is that without the third songwriter, Christine McVie – who seems likely to make a cameo appearance at their next two O2 shows – the dichotomy between the pair's writing is so stark. Buckingham's songs, for all their melodic beauty, are often harsh and angry, and his between-songs banter could have been scripted by a therapist; Nicks's are soft and pillowy, a Laurel Canyon prefiguring of goth, and her chat is rambling and charming.

Nevertheless, for the opening hour, it's blissful – an opening of trio of Second Hand News, The Chain and Dreams is jaw-dropping in its self-confidence. Nicks may no longer be able to reach the high notes of Rhiannon, but the song's construction is sturdy enough to survive the removal of its ornaments. And a one-two punch from the extraordinary 1979 album Tusk is simply jaw-dropping: Not That Funny echoes around the vast room like an invitation to step outside, and Tusk itself is eerie and uneasy and wonderful.

But there's a distinct and rather long sag as the main set winds down – looking down from the top tier, one can see mobile phones being checked on the floor as I'm So Afraid meanders on – and the relief that greets Don't Stop is palpable. It's a victory in the end, but it's a set that would be so much stronger at half an hour shorter.
Nickslive at Wednesday, September 25, 2013
Share