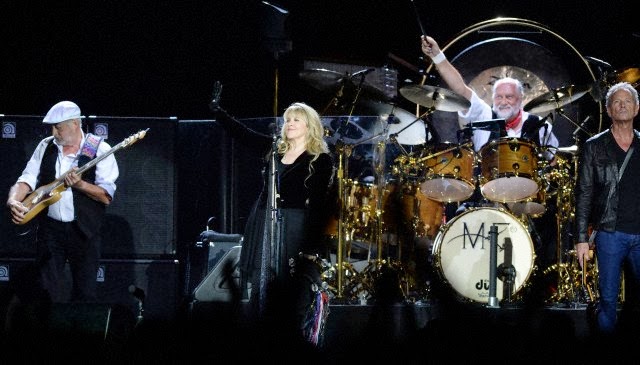 The four ongoing members of Fleetwood Mac performed for the first time since 2009, with an epic set list drawn from the late Seventies. While Stevie Nicks still possessed a voice that bewitched, Lindsey Buckingham was a fiery leader, thumping his chest to celebrate every new solo accomplished

Though a rumoured reunion with the long-absent Christine McVie did not materialise last night, the four ongoing members of one of rock's most turbulent bands looked like firm friends as Fleetwood Mac played in London for the first time since 2009.

It was all gushing introductions, a long hug for Lindsey Buckingham from Stevie Nicks, much hand-kissing and warm saluting. Given that most of their finest songs come from a period when their various couples were splintering painfully, time really is the great healer.

Most of an epic set list was drawn from that peerless period of the late Seventies when the Americans Nicks and Buckingham arrived to turn the bluesy Brits into superstars — The Chain, Tusk and Go Your Own Way all had energy to burn.

Nicks still possessed a voice that bewitched, especially on the acoustic Landslide. While even the engine room of Mick Fleetwood and John McVie had the occasional break, Buckingham was a fiery leader, thumping his chest to celebrate every new solo accomplished.

"There are quite a few chapters left in the book of Fleetwood Mac," he claimed, airing one likeable new song and a long lost rarity. It's been a fascinating read so far.

More Video - Thanks to Kristianlw for the quick uploads
Never Going Back Again | Landslide
Nickslive at Wednesday, September 25, 2013
Share