Stevie Nicks is back on tour with Fleetwood Mac. Steve Adams chats to her about what fans should expect. 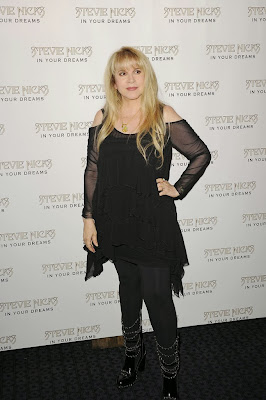 Rock legends Fleetwood Mac are back on the road for their first UK shows in four years and the buzz is that keyboardist Christine McVie – who quit the band in 1998 – will rejoin other members of the band’s classic line-up for at least a couple of performances.

The move has delighted singer Stevie Nicks as much as the fans, as she formed an instant bond with the band’s only other female member when she joined in 1975 alongside guitarist Lindsey Buckingham.

“I knew from the beginning when Lindsey and I joined Fleetwood Mac, that Christine and I had to really stand our ground,” says the enigmatic singer.

“We had to be a force of nature or we would be considered second-class rock stars. And between the two of us that was never gonna happen!

“We made a pinky swear pact – ‘we will never, ever walk into a room that’s full of rock stars and not be treated as if we’re not as good as them.

“Because we are as good as them.’”

The duo more than proved their point, writing many of the band’s biggest hits, including a huge chunk of seminal album Rumours, which has now sold a staggering 45 million copies worldwide. Nicks has also enjoyed a successful solo career alongside her four decades in and out of Fleetwood Mac – the band have a habit of splitting and reforming – but is happy to be back performing, even though the recent US tour schedule was gruelling.

“For me it’s not such a big deal because I stay up really late every night anyway. But for Lindsey, Mick (Fleetwood) and John (McVie), they go back to their rooms and go to sleep.”

The singer believes the effort has been worth it though, rating the shows as some of the best they’ve played.

“When people in Britain see the show they’re gonna be blown away!” she says.

“Honestly, rock bands that are 30 years old would baulk at this schedule, the amount of songs we’re doing and the length of the show. They would go, ‘you are kidding? Two hours and 40 minutes a night?’”

The gigs also include the band’s first new music in a decade, after they released an EP earlier this year. The music was recorded just after Nicks’ mother died last year, which left her so devastated she was unable to go to the studio.

“I didn’t want to go anywhere,” she admits. “I didn’t leave the house for almost five months. I worked on the edit of my documentary about the making of (solo album) In Your Dreams, and then I got pneumonia.

“I watched the entire first season of Game Of Thrones – so that was great! That certainly took my mind off everything.”

Not surprisingly the almost ethereal pop star is quite a fan of the fantasy show.

“The author (George RR Martin) is my age and it blows my mind that he’s able to create this vast, interlinked world,” she says.

“As a songwriter I write little movies. But I can’t imagine sitting down and writing even one small book. I would love to write some music for Game Of Thrones. I’ve written a bunch of poetry about it – one for each of the characters.”