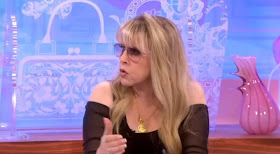 The pair lived together for five years before joining the band in 1975 but their romance ended a few years later and Nicks has been bottling up her feelings about Buckingham ever since.

The Don't Stop hitmakers announced last year (12) they were reuniting for a tour, and Nicks poured her heart out to Buckingham in a mammoth phone call in a desperate bid to clear the air ahead of the comeback.

She tells U.K. TV show Loose Women, "We are getting along probably better than we ever have... Because about a year and a half ago I had a talk with Lindsey. I had the 'everything I wanted to say to you for 35 years' talk. I started in 1968 and I worked up... I started with (recalling how) he cut my fingernail off once because he decided I should practice guitar more. That was not a good move on his part. And I went from there all the way up until now.

"He was very quiet. It was a solid hour and a half where I never stopped talking... It's much better now since the talk. Now we walk onstage and we are holding hands.