Stevie Nicks movie to Premier ahead of tour 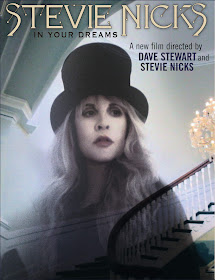 Get To The Front
Entertainment Focus


Stevie Nicks will be joined by Fleetwood Mac members Christine McVie and Mick Fleetwood for the premiere of her new documentary In Your Dreams.

Taking place at the Curzon Mayfair, London on Monday 16th September, Nicks will also be joined by Dave Stewart who collaborated with her on the documentary.

Stevie will attend a photocall at 6.15pm for the red carpet event, followed by interviews, before joining fans and guests for the premiere at 7.30pm. The film will be introduced by journalist Craig MacLean who will host a Q&A session with Stevie before the film begins.

Ticket information not yet available.

Stevie Nicks of Fleetwood Mac teamed up with Dave Stewart of Eurythmics fame to create her 2011 album “In your dreams”. Now just ahead of Fleetwood Mac’s UK tour there will be a UK premier of the behind the scenes footage of that process with the film of the same name.

Co-produced and co-directed by Dave Stewart, “In Your Dreams shows the up close and personal musical journey that the two artists embarked on in Nicks’ Los Angeles home as they wrote and recorded an album during what Nicks called “the greatest year of my life”. Nicks felt compelled to share the joyful experience with her fans on what she termed “the day the circus came to town”. The record was co-written by Nicks and Stewart and produced by Stewart and Glen Ballard.

A multi Grammy Award winning artist and Rock & Roll Hall of Fame inductee, Nicks allowed cameras inside her magical old mansion high atop the hills of LA with a wild cast of musicians and friends. The inner life of the legendary Nicks has by her design long been kept at a distance from the public. We learn in “Dreams” that her world features costume parties, elaborate dinner feasts, tap dancing, fantasy creations and revealing song writing and recording sessions all of which are captured on film. There are cameos by Edgar Allan Poe, Mick Fleetwood, Reese Witherspoon, a massive white stallion in the backyard, owls and naturally a few vampires who appear in several “home movie” style music videos.

In addition to the story of the Nicks / Stewart creative partnership, “In Your Dreams” has plenty of other cinematic payoffs including rare never before seen personal scrapbook stills from Nicks’ childhood and family life and a wealth of candid backstage and performance shots taken over the last 35 years. The documentary was produced by Dave Stewart’s production company, Weapons of Mass Entertainment.

“This is our baby and we give her lovingly into your dreams. From our tribe to yours,” said Nicks.

“She is really real. It doesn’t matter if she is singing in the make-up room or in the middle of a TV interview. She is who she is, and she doesn’t change.” commented Stewart.

‘In Your Dreams’ will be released on DVD and VOD in November. Take a look at the trailer.