Well the 30th Anniversary of the first US Festival (September, 2012) came and went without the intended release of the documentary - but not all hope is lost!  Yesterday the US Festival Facebook page posted this update on where they are regarding both the 1982 and 1983 US Festivals release: 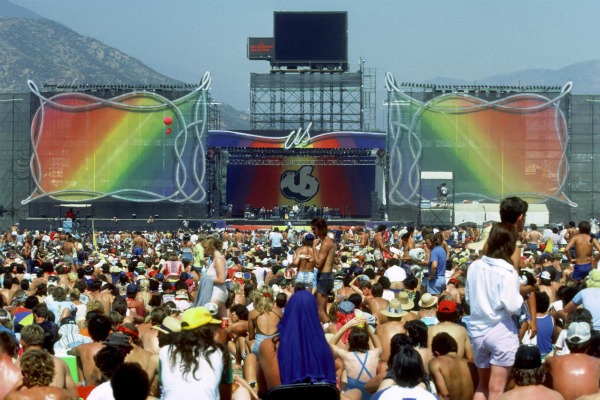 Dear Us Festival Fans.....we know there are many thousands of you out there clamoring to see the Us Festival: Us Generation 1982 doc feature and/or Us Festival 1983 Days 1 - 3. The following is a short update and please be patient as we are working very hard to bring you the most complete programs that fully recapture the spirit and essence of the 1982 & 1983 amazing events.

US FESTIVAL 1983 DAYS 1 - 3: In final stages of negotiations with Global Download & Streaming Services and retail DVD/Home Video. Release dates to be determined soonest.

US FESTIVAL 1982: THE US GENERATION (doc feature): In post production. We recently concluded deals with DVD/Home Video Companies in US & Japan. Upon completion of the film we will announce our distribution partners and release dates.

Thanks again Us Festival fans for your continued interest in the projects. You've waited 30 years, so I sincerely hope you can wait a few more months.


Well this should excite the masses!  Fleetwood Mac are part of an upcoming documentary on The 1982 US Festival.  Check out the official trailer below... Fleetwood Mac come in at about the 2 minute mark where they are shown on stage, in crisp clear footage, singing a bit of Go Your Own Way... They are also on stage introducing Apple co-founder and US Festival visionary, Steve Wozniak.

This looks so cool, I can't wait to see it!  The documentary will in some format be released to coincide with the 30th Anniversary of the Festival this Labour Day September 3, 2012.  Originally scheduled for a Labour Day release the documentary has been pushed back a bit as they are awaiting final interview approvals from key artists that performed.


“This film is the only authorized and sanctioned documentary of the 1982 US Festival”, according to Carlos Harvey, CFO, UNUSON.  ”It captures the cultural essence of the festival and tells the behind-the-scenes stories the fans will appreciate. After 30 years it seems like the right time so the fans can relive the experience and we can create new fans too”.
On a blistering hot Labor day weekend in 1982, legendary Apple co-founder, Steve Wozniak’s vision played-out in the 110 degree California sun.
Over 375,000 people gathered at Glen Helen Regional Park in San Bernadino, for three days of music and technology.
The documentary will feature legendary performances and interviews. The concert headliners included:
~ B-52′s
~ Fleetwood Mac
~ Police
~ Ramones
~ Santana
~ Talking Heads
~ Tom Petty and the Heartbreakers
“The release of the documentary will coincide with the 30th anniversary of the event on Labor Day, September 3rd, 2012", said Bruce Gibb, co-owner of Plum Moving Media, Inc.  “Our Milwaukee based company is delighted to be partnered with UNUSON and ICON. It is our love of music and Apple products that attracted us to be involved in this project, plus our skills and experience are suited for telling this story.”
Full Press Release
Facebook Page
Nickslive at Thursday, September 05, 2013
Share