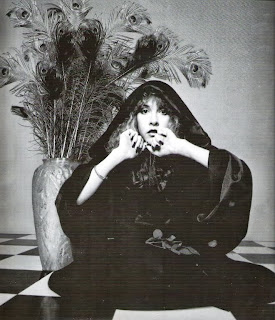 Ryan Murphy creator of the American Horror Story series speaks about this season's "Coven" saying this "we use a lot of Stevie Nicks music this year, so I called Stevie Nicks and asked if she wanted to be part of the show and she said sure I'd love to." She likely will be part of the show just on a musical level, but still, this is pretty cool and I loved the two seasons prior, so I'm looking forward to "Coven".  It premieres tonight October 9th on the FX channel. season is his favourite and among other things he says

The first indication that Stevie's music would be used in the series came mid-september when Ryan sent out a Tweet saying: "Thank you Ms. Stevie Nicks for letting us use your music in COVEN! You rock and I love you."

Update to this post: 8 Songs will apparently be used this season.  The Witch Misty Day is obsessed with Stevie Nicks.  She burned at the stake in Ep.1 but comes back to life. More HERE

AMERICAN HORROR STORY: COVEN tells the secret history of witches and witchcraft in America. Over three hundred years have passed since the turbulent days of Salem, and those who managed to escape are now facing extinction. Mysterious attacks have been escalating against their kind and young girls are being sent away to a special school in New Orleans to learn how to protect themselves. Wrapped up in the turmoil is new arrival Zoe, who is harboring a terrifying secret of her own. Alarmed by the recent aggression, Fiona, the long-absent Supreme, sweeps back into town, determined to protect the Coven and hell-bent on decimating anyone who gets in her way.
Nickslive at Wednesday, October 09, 2013
Share