Actually it is quite simple, says Lindsey Buckingham, the lead guitarist of Fleetwood Mac, before rappelvollem house. One must only find a formula for success and then to squeeze the last drop. The stupid thing about it is that is only offered from an economic perspective approach for artists, however fatal. So Buckingham has taken a new direction with the band in the late seventies and "Tusk" is set in the world. And this work we will now celebrate with a few songs, he announces.

Tusk was an ambitious, far ausholendes double album with a unique theme song, a kind of tribal singing with pronounced rhythmic structures. And an album that nobody expected, not after "Rumours", this stroke of genius from the year 1977.

Easily have never made it Fleetwood Mac, and certainly not during and after their aptly "rumors" baptized main work. Emerged in London in 1967 from John Mayall's Bluesbreakers, named after drummer Mick Fleetwood and bassist John McVie band survived several line-up changes. 1970 came McVies Christine Perfect, previously singer at Chicken Shack, the band. The formation, which is appreciated throughout the world for decades, created in 1975, as the U.S. duo Buckingham / Stevie Nicks brought new influences and ideas into the band.

The success took its toll. When the five met in the spring of 1977 in California in the studio to record the new album, were all private worlds in ruins. Fleetwood had found out that his wife cheated on him Jenny, the marriage of McVies was after eight years at the end, and also the long-standing romance between Buckingham and Nicks ended in tears and bitterness.

In this highly emotional, explosive mélange, additionally fueled by alcohol and drug problems, was one of the most successful works of popular music, on a par with "Dark side of the Moon" by Pink Floyd, Led Zeppelin IV, or "Thriller" by Michael Jackson. Some 45 million copies of "Rumours" were sold today. Eleven songs of timeless beauty, presented with great ingenuity, craftsmanship and perfect production.

Now, Fleetwood Mac for the first time in years on the road, first in the USA, now also in Europe. It was not a bad idea, the concert with three tracks of this album (Second Hand News, The Chain and Dreams) to start. And then early Rhiannon, a hymn like a sunrise. You do not know which to admire more: Nicks hoarse, like gold dust finished, voluminous voice, or her talent for composition, which has also yet to be loose enough for an outstanding career as a solo artist. For the journal New Musical Express Nicks is "the ultimate rock goddess".

For the fans in Stuttgart too. The game was quickly won the audience hooked with irresistible melodies. Two and a half hours were "The Mac" the tension high throughout. And creativity in the band is reawakened after ten years of hiatus. As the wonderful "Sad Angels", was a four new, recently released songs, ammunition reinserted in the barrel.

In the end, only one blemish was Christine McVie is no longer there since 1998. They missed as a songwriter, but even more than vocal counterpart to Nicks. Buckingham is an exceptional guitarist and arranger, his voice less impressive potential. Maybe that is why Nick has betrayed a reporter before the tour that they would be ready immediately, Christine McVie five million U.S. dollars, payable to the hand when she goes back on tour.

Wish we fully support, but we do not even have the five million on hand. 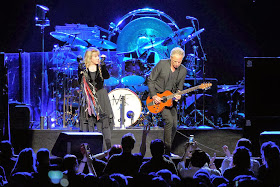