Fleetwood Mac Live in Stockholm: The Best.. The Worst.. and What Surprised + 81 Photos

Fleetwood Mac, the well-playing soft rockers from the 1970s, has gone from being a band that Stevie Nicks was one of the members to be the veritable, mardi gras-style parade vehicle for Nick to come. Her iconic status in contemporary music has grown in a way that the last few years, if not come to overshadow the band's influence, at least match it.

When Fleetwood Mac are now returning to Stockholm Globe Arena is exactly 35 years since they released
"Rumours," one of the best selling popskivorna ever, with Nicks at the height of his älvlika, patschulidoftande, poetically responsive capability. 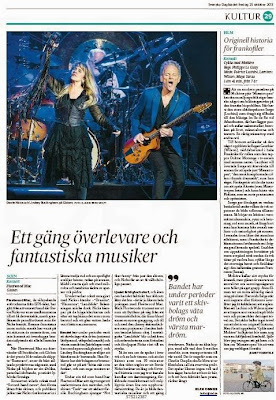 The concert begins also with "Second Hand News," the first song from the album, and the crowd cheers when Nicks voice enters the song's third line and a spotlight reveals her already on the stage, dressed in black chunks and a microphone and tambourine covered with lace and beads. The selection seems to be done with Nick in mind - "Dreams," "Rhiannon," "Landslide". The load noticeable though. Nicks struggling on high heels and after a while it feels like a bar stool and a glass of water would have been better accessories.

The band has at times been a record company's wet dream (extremely easy to listen to, well played music) and worst nightmare (lovebirds with addictive personalities) and Lindsey Buckingham reveals that emotions are answered. He explains how the record companies' working method is to "Find something that works, and then suck the life out of it." During his time as a band Fleetwood Mac has seen itself forced to undermine the method, and the album "Tusk" was one such attempt. Buckingham sings "Not that funny" from that particular disc, and Nick gets a much-needed breaks.

The sound is loud and big, and even though the band actually has aged, it sounds good - it's like the whole point of Fleetwood Mac. Mick Fleetwood drum kit looks like a moving van on the way from a drummer collective, which include a huge gong, and even the cheesy screensaver projected in the fund behind the band feels okay. The nostalgic "Landslide" also becomes years and the experiences that have changed and deepened Nick's voice into a strength.

So so what if they play for over two and a half hours, and it feels like 30 minutes of that time is of the Stevie Nicks tells a long and confused story that I think maybe about vacuuming, outdated music formats, and possibly even a little of copyright infringement. They're both great musicians and a bunch of survivors. Nicks is a true hippie, with all the lifestyle entails, transported to our present day. It's almost as if Charlie Chaplin would step out of the screen in all its black and white glory. It plays like no matter what she says, just that she is here, and she can actually talk, goes a long way.


(google translated)
"Silver springs" is hard to beat beautiful
So good was Fleetwood Mac in Globen
Aftonbladet.se
by Joacim Persson


So good was the concert.

What was the best?
- Extra number "silver springs" is hard to beat beautiful. But both "Landslide" and the equally sedate version of "Never going back again" as Lindsey Buckingham and Stevie Nicks doing alone on stage is brilliant. And Lindsey's guitar playing in general.

What was the worst?
- Looking at how good the song should be so is "Rhiannon" a decrepit disappointment.

What surprised you?
- The vansinnesstompiga "Not that funny" from "Tusk". Far from the best, but funny. On the whole, it is fun to see the band lit into the material from the little unruly album.

How was the crowd?
- mature and restrained. Lyrical with his hand in his pocket. Except for the more sweeping enthusiasm last half hour.

How many plus get Fleetwood Mac tonight?
- Three plus. A little unevenly along this two hours and 40 minutes long hours but still much better than last visit to Sweden.

(google translated)
Photo Extra: Fleetwood Mac on stage at the Globe
One of the most successful bands play at the Globe.
by Anders Dahlbom 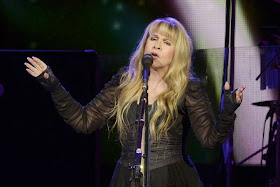 Fleetwood Mac is especially on tour to once again celebrate their biggest seller "Rumors".

- Now we are looking to get in once the party, says Stevie Nicks from the scene.

A more or less crowded globe is the place to enjoy hits from the band's most commercially successful period in the 1970s - and '80s. But the occasional new song teaches sneak into the song, if you're going to go to the concerts the quartet already harvested over Europe.

The clock had struck a few minutes past 19:30 when Fleetwood Mac stood on stage and opened with "Second Hand News," "The Chain" and the classic "Dreams".

- Now we are looking to get in once the party, says Stevie Nicks.

On stage - bathed in blue and green lights - are also three musicians and two choirs shoes.

"As we like to share with you" Lindsey Buckingham faced "Sad angel":
- We are very happy to come back here. This time we bring something new, new songs that we like to share our experience of.

John McVie (bass) and Mick Fleetwood (drums) have been with the band since its inception in 1967. It was when the then husband and wife Stevie Nicks (vocals) and Lindsey Buckingham (guitar, vocals) joined the band in 1974 as John's wife Christine McVie (keyboards and vocals) was further sparring help on låtskrivarfronten. Tonight she will not be on stage. McVie defected in 1998, but actually made a comeback last month in London for two shows. So maybe, with a little (or very) lucky she shows up and makes the 70s Fleetwood Mac complete ...