(Google Translation)
"Fleetwood Mac has often been apart, and every time we get back together is different." These are the words of singer / guitarist Lindsey Buckingham that yesterday with his band shone in the Ziggo Dome in Amsterdam. Their world tour will focus their successful album Rumours that worldwide more than forty million copies sold was in the seventies. And still, they let the hearts of the become older fans beat faster.

Long hair, leather jackets and boots with strings, so does the average Fleetwood Mac fans out there about. The audience consists mainly of old hippie middle-aged couples, but also runs occasional young people between. The beer flows freely and everyone is anxiously waiting for the rock band that already exists more than 46 years. The room is dark, but the stage is illuminated by all the cameras flash. If you look at the fans of Fleetwood Mac, you would think that they are walking around with an analog camera, but they also went along with their time.

Suddenly the crowd begins to cheer hard and get the stars. It seems as if time has stood still: singer Stevie Nicks still has her angelic appearance. With her long black dress and long blond hair dancing to the beat of her tambourine. See the other band members there is something older. Especially the hair of drummer Mick Fleetwood and bassist John McVie have lost all their color.

But that age is certainly not to hear the music, the band still plays very tight with no errors. The voice of Nicks sounds the same at age 65, although they may treble drops. The famous hit Dreams are the years to feel. Seventy strong vibes Especially when someone in the audience a joint rears and the smell of cannabis fills the room.

The highlight of the evening is the acoustic solo of the song Big Love that Buckingham plays. The old rocker is completely in his element and plays down the house. Also Nicks is still the magic dreamy hippie girl is dancing on stage. An emotional moment is when she embraces her ex Buckingham. But also special, because the real fans know that the two ever had a severe namely brief relationship. And that passion is still felt in the room. 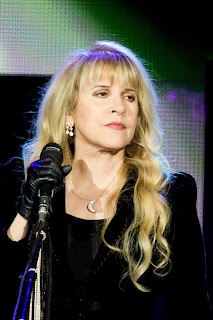 (Google Translation)
Is this the last time? It is the question that is equally topical again at every tour of Fleetwood Mac. Indeed, the band built their fortune on their tumultuous relationships with the brilliant album Rumours from 1977.

Since then keeps the number band explosions neatly pace with the number reunifications and is the Rumours-composition still for 80 percent complete. Only Christine McVie lacked last night in a full Ziggo Dome in Amsterdam. In London made ​​the keyboardist - since 1998 not part more of the group - previous month yet equally her appearance during Do not Stop, but of a renewed accession is no question so also the written by her hits Little Lies and You Make Lovin Fun untouched remained. 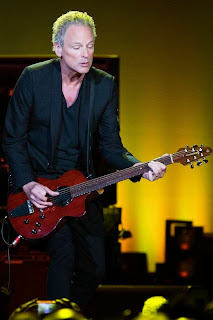 An even more pressing question: is a night Fleetwood Mac a nostalgiebad or the resurrection of a legendary group? The answer to that question actually was already in the merchandise booth where only the albums Rumours - that Fleetwood Mac in a battle transformed from finely tuned folk formation to rock band with stadium range - and Tusk (1979) were available. The overture of the concert confirmed the suspicion immediately three songs from Rumours:. Second Hand News, The Chain and Dreams.

with the verse written jumpy Sad Angel tried then to prove that there is enough new life is in the group, the quartet but the forties and fifties in the hall knew enough:. Fleetwood Mac was especially come to honor his legacy and that worked with gusts particularly well. Stevie Nicks sang Dreams delicious dreamy, fetched fashioned from during Rhiannon and had her tambourine features a new bouquet-colored ribbons. Lindsay Buckingham now carries the role of frontman and did his best as many songs a lesson in pop history to be accompanied. The band made ​​himself the least bit easy from and chose a set of about 2 hours and 3 minutes. Seven still always irresistible numbers of Rumours contained which eventually. All performed with craftsmanship and ovational welcomed. Thus fell it actually nobody on that the real magic out Fleetwood Mac has long been disappeared. On 26 October plays Fleetwood Mac again in the Ziggo Dome. This concert is sold out. 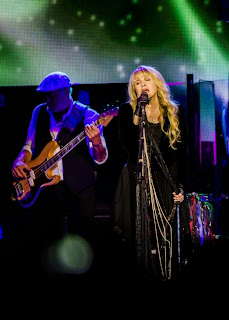 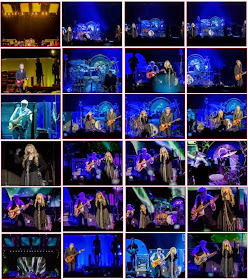