So good was Fleetwood Mac at the Globe in Stockholm
by Joacim Persson
aftonbladet.se
Concert in Globen, Stockholm . Attendance : 10,024 people.

(google translated)
Fleetwood Mac 2013 is of course a completely different band than the wrenching chaos that made " Rumours " to one of the world 's most successful albums . When was the band five explosive egos , each with unique stage charisma. Now it features slowing .

But even if the Globe gig will be powerless , lengthy and inflexible sometimes makes Fleetwood Mac a warm worthy cavalcade primarily through the classical second half of the 70s. Often with an authentic and beautifully forgiving mood on stage.
Bright attack

Today, Lindsey Buckingham band's natural center. The voice never wavering , his nylon acoustic attack on " Big Love" is still shining and the guitarist really shines in its discharge in the " I'm so afraid ."

Sitting on the floor Humbly, he controls the entire evening .

Finest is to see how Lindsey after just over two hours constant on stage still lingers when "World turning" turns into Mick's insanity gambit to drum solo .

In a corner with his legs stretched out across the floor , he sits through the flapping stroke and Micks almost inaudible galenmumlande the mic.

I imagine that he enjoys . To Lindsey knows that Mick drumming will not be there forever.

The entire globe is holding its breath As he faces the very last encore baring similar thoughts about Stevie Nicks , after their nearly lifelong relationship with each other .

Then do the former lovers a huge beautiful " Say Goodbye " together. It is eerily quiet in the Globe.

There are new pictures to remember Fleetwood Mac. 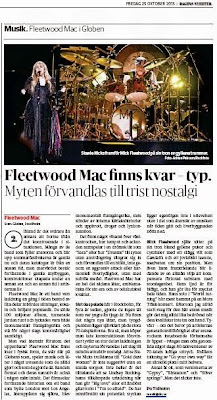 
(google translated)
Sometimes it's harder than usual to ignore the constructed in the situation. Many of the bands that fill stadiums and supporting the summer festivals are old now and their catalogs are from another time, but the added value still exists in old mytbyggen, designs created in a different era and a different time in artists' lives.

Fleetwood Mac is a band whose charge once consisted of equal parts mutual friction, cocaine and brilliant pop music. They sold 100 million albums , toured around the world and managed to be both monumentally successful and stand for any kind of artistry at the same time .

But what remains apart from the obvious? Fleetwood Mac is still in physical form, they stand there on the Globe stage, playing music and sounds in any respect as they have always done and as they did then. The bands formula and their narrative is also somewhat intact. It conveys still the story of a band that changed London to Los Angeles, reinvented themselves, became monumentally successful, torn apart by internal love affairs and breakups , drugs and luxury consumption.

There is something restful over the west coast rock , the tempo and chords interact in a dreamy song "Sara " or how " Dreams " seemingly effortlessly meanders in and turned into a big hit , not through an aggressive attack or harmoniell oversimplifying, but with subtle funds. Fleetwood Mac has a lot of those songs, emblematic of his era and of unquestionable quality. The last time they played here in Stockholm , four years ago, they did not let those younger than twenty years. Now there are some new songs, but the emphasis is obviously on the big 70's plates. Great so , but you do not buy the design disappears unfortunately a large part of the charge and myths transformed at a stroke to less attractive nostalgia. Seeing Stevie Nicks troll dancing to "Gold Dust Woman" is not suggestive but somewhat sadly. Nor is it pleasing to see Lindsey Buckingham struggled to discharge when he makes "Big Love" or an endless guitar solo in " I'm so afraid ." They have misunderstood their potential : the strength is really in utlevelsen but in what remains of the music when the time passed and the superstructure worn down . Mick Fleetwood himself sitting on his throne among golden toms and cymbals with a beard white as Gandalf and a jovial smile, aware of his position . But even his performance suffers from a general desire to compensate for loss of substance with magnificence. His sound is beefy, and he makes a bit too much all the time. His solo in "World turning" hear most at home on a Mora Marshes concert. Since I have always been fond of this era, music that makes me always saddened when its qualities are not taken care of. Sorry - it depends on the artists' generational or arena rock's inherent curse is open - often forced to suffer through some sort of 80th century version of the 70th century airy expression. Tonight's rendition of "Go your own way" is given a special place in my hell . Others are ok, as versions of "Gypsy," " Rhiannon " and " silver springs".  But it is not enough.
Nickslive at Friday, October 25, 2013
Share