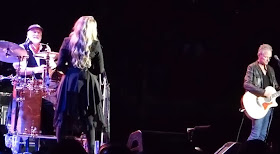 Amongst the barrage of glowing tweets about the show, I noticed a tweet from Jeremy Clarkson, who was also there that night, complaining something along the lines of “Since when did Fleetwood Mac become a Lindsey Buckingham tribute band?”. You have to wonder what he was expecting. Christine McVie leaving the band in the late 90's has, in effect, reduced their repertoire rather considerably. It knocks out, “Songbird”, “Little Lies”, and “Everywhere”, to name a handful; a lot of their softer AOR moments actually. Stevie Nicks, although a vital component to their on-stage presentation, a crucial foil for Lindsey, and responsible for some key moments in their back catalogue, doesn't play an instrument (tambourine excepted) on-stage. This leaves Lindsey Buckingham, like it or not, as the key musical driving force for the show. In fact, he's the only member of the Mac who's on-stage for every song of their almost three hour show, and boy, is he driven. I saw another reviewer describe him as essentially battling with his guitar on-stage. This is an apt description. At one point, he appeared to be physically beating the strings, both arms flailing.