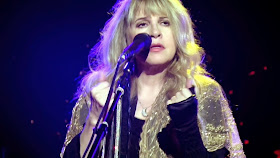 They’ve never been less than enduringly popular, especially in this neck of the woods where sell-out shows are the norm. But for some reason, Fleetwood Mac have suddenly become hip with a much younger audience. In fact, a sizeable contingent of the crowd tonight weren't even born when the band’s 40 million-selling 1977 opus Rumours was released.

In truth, it’s not difficult to work out why they’re so acclaimed after all these years. As well as being a formidable hit-making machine, the ‘Mac has a lot going for it, not least the bewitching stage presence and voice of Stevie Nicks and the guitar playing and songwriting genius that is Lindsey Buckingham (looking impossibly fit and healthy).

Meanwhile, the founding members – drummer Mick Fleetwood and bassist John McVie – hold their own as one of the finest rhythm sections in rock history.

Opening with a powerhouse trio of tracks from the aforementioned Rumours in the form of ‘Second Hand News’, ‘The Chain’ and ‘Dreams’ makes for a high-octane start to what is a lengthy two-and-a-half-hour show.

The hits keep on coming, with early highlights including a seductive ‘Rhiannon’, the haunting ‘Gypsy’ and the hypnotic ‘Gold Dust Woman’.

There is room, too, for a new song – ‘Sad Angel’. It is a surprisingly meaty but melodic rocker. A trio from Tusk includes the title track and the lovely ‘Sara’. The star of the show and the one who keeps it all together is undoubtedly Lindsey Buckingham; his electric and acoustic strumming is, as Dave Fanning comments after the show, nothing short of astonishing. A solo version of ‘Big Love’ sees Buckingham display some incredible fretwork gymnastics, as does ‘Never Going Back Again’, while a lovely acoustic duet on ‘Landslide’ with Nicks was another memorable moment.

However, it is the mega hits that have the packed arena on its feet with ‘Go Your Own Way’, and ‘Don’t Stop’ eliciting ecstatic responses. The encore ballad ‘Silver Springs’, a Rumours out-take, has become a deserved live favourite take. The hoped-for appearance by former member Christine McVie, who was said to be rehearsing with the band in Dublin, proves unfounded. But no-one is complaining.
Nickslive at Saturday, October 12, 2013
Share