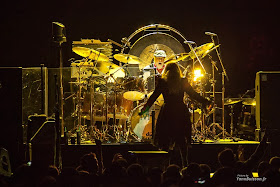 
FM rock fan, I had to attend the new date after missing the previous passage of Fleetwood Mac at the Zenith. The surprise was that more than learning that Fleetwood Mac would occur at Bercy. Their eponymous album Rumours prances in the Top 10 best-selling albums in the world (45 million albums!). Established in 1967 as a combo of blues style by Mick Fleetwood, John McVie and Peter Green, the group is transformed with the arrival of Lindsey Buckingham and his beloved Steve Nicks. As the story Steve Nicks during a long introduction, it is thanks to the insistence of her companion she joined the group in 1975.

Continue to the full review and photos
Nickslive at Wednesday, October 16, 2013
Share