On the heels of the devastating news about John McVie...and the cancellation of the Australian / New Zealand leg of the tour, it's particularly poignant to hear Stevie dedicate "Landslide" to her band Fleetwood Mac... and to Lindsey where she thanks Lindsey, in a somewhat broken voice, for all the wonderful things he has done for her and all the wonderful music he has brought into her life and to the Amsterdam fans that were so gracious to wait for them to work out their sound issues. 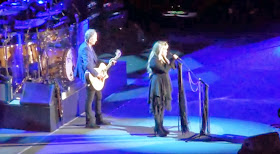 As the news spreads through the media world wide today about John's situation and the tour, fans have been taking to social media looking for answers, expressing their disappointment but more importantly sending good vibes, well wishes and prayers to John.  Cancer is not something to mess around with and he likely has some of the best Doctors in the world looking after him and advising him. Without John... There can be no Fleetwood Mac - so we again extend our best wishes to John and his family and to the Fleetwood Mac family to stay strong, positive and hopeful that treatment does the trick and that we can once again see John up there on stage making those rafters in the arenas vibrate from his incredible bass lines.

Still with all this news a couple of questions linger.. Will Fleetwood Mac's Las Vegas date and the private show they have booked in Las Vegas go ahead as planned?  It appears that ticket sales on Ticketmaster for the December 30th public show haven't been cancelled yet, but they do appear to have been suspended for the time being. Also, with Stevie's film "In Your Dreams" on schedule to screen at the Brisbane International Film Festival on November 13th, will Stevie still attend the planned Q&A? Obviously with Fleetwood Mac's tour dates in Australia lined up it was easy for her to co-ordinate her appearance but now with the cancellation, this leaves a big question.