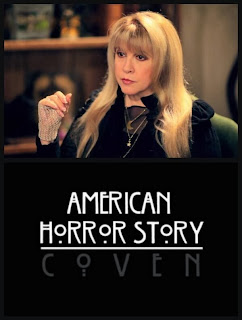 Soooo much happened on last night’s American Horror Story: Coven…but it’s all sort of trumped by the news that Stevie Nicks is coming to the show! Yes, Misty Day’s idol will be visiting AHS: Coven in a future episode as series co-creator Ryan Murphy announced this week on Twitter. EW talked to Murphy for our exclusive weekly chats about details on Nicks’ appearance as well as the latest Coven episode, “The Axeman Cometh.”


RYAN MURPHY: She appears as herself. It’s part of Fiona’s ruse in that Fiona is trying to get the true Supreme to reveal herself because she needs to stay alive. So she tells Misty Day that the Supreme gets so many great things in life, like tickets to the Oscars and Met Ball tickets. So she brings Stevie Nicks in as a gift to Misty to prove to her that if she exhibits more power she’ll get that and more. Then the other girls come home and see Stevie and Misty singing and it starts them trying to move much quicker to prove that they are the Supreme.

Do you know when this will happen?

It’s episode 10 titled "The Magical Delights of Stevie Nicks". It’s right when we come back from winter break. I had a really good conversation with her and explained to her what the show was and it’s gotten such a big reaction from people. She said, “Oh I wish I could be on the show.” But she couldn’t because she was traveling with Fleetwood Mac in Europe but then Mick Fleetwood John McVie got cancer so they cancelled those dates. Then she called and said, “I’m now available sadly enough. If you wanna use me.” So I said, “Let’s do it!” So she’s flying in for like two days and doing her scenes. I know every person in the show is like, “I better be in that goddamn scene!” It’s funny.

I bet Lily Rabe was freaking out!

She was freaking out. She texted me this morning saying, “Is it true? Is it true?” We’re trying to figure what song she’s going to sing with Misty.