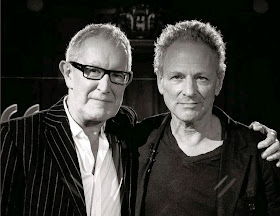 Sometimes TV doesn’t need to be “challenging” or “groundbreaking” to be thoroughly worthwhile. The first episode of Sky Arts new “…talks music” series saw the familar format of a live, seated interview applied to one of pop music’s highest achievers: Lyndsey Buckingham of Fleetwood Mac. TV producer, Malcolm Gerrie led proceedings in an attractive theatre in front of an audience of students. Most memorable were some blistering live demonstrations of Buckingham’s craft.

Gerrie’s interview style may have been a little more One Show than Parkinson but still he kept the singer/guitarist well at ease. The ever-youthful 64-year-old fizzed and buzzed through his trip down memory lane. First, we learnt how he met Stephanie “Stevie” Nicks at high school when he was a music geek in the junior year, and she a feisty free spirit in the year above. The two met again a couple of years later and a romantic and musical union blossomed. After joining Buckingham's college band, the two then split to form Buckingham-Nicks.The singer's description of moving down to LA and scoring a record deal after six months conjured up images of palm trees and wide-eyed hope. Then, after hearing how Mick Fleetwood hired them almost on a whim, one imagined wild stories of Fleetwood Mac’s legendary excess to be just around the corner.

In the end, however, we didn’t get much gossip - at least not directly. Buckingham told us in broad terms how the studio during the recording of Rumours consisted of two pairs of feuding exes and a whole lot of drugs. But, for all the dirt he didn't spill about the personal dynamics, his manner and expression gave a vivid sense of the tension. Moreover, his dissection on the nuts and bolts of the album revealed the barbed subtexts to the words. Gerrie’s cue card then prompted a question on how the band survived the emotional and physical turmoil of this period. Buckingham’s reply was “youthful resilience”.

That still didn’t explain why he now look healthier than the others. Maybe it is just genetic? Buckingham’s healthy tan and cheerful philosophising certainy seemed like the product of alpha genes. Also his Californian manners betrayed no sense of the volatilite and difficult nature some have accused him of. Instead the impression he gave was of a well-centred man of huge natural talent - a craftsman whose forte is arranging and completing half-finished ideas. The various demonstrations he gave on an acoustic guitar prompted open-mouthed expressions of awe from the young audience. His rendition of "Big Love" was stunning.

Of course, after Rumours, the only way was down. When given the job of producing the follow-up, Tusk, Buckingham said he didn’t think it was worth even trying to compete with what had gone before. In a series of mischievous understatements he described how, despite the album being a creative success, the others took against him for his role in making it a, relative, commercial flop.

So, he then decided to look to solo albums for his personal expression. He called his own stuff the “small machine”, where instead of “bringing a script to the actors” he was able to “splash paint on canvass like an abstract artist”. At the end Gerrie asked Buckingham what his favourite Fleetwood Mac album was. The response was, predictably, Tusk. Unsurprisingly for such a thoroughly well-mannered chap, when then asked about his greatest achievement he said it was his children. Edgy stuff this series may not be but with the right guests – Tony Bennett next up looks promising – expect it to provide reliably fascinating chat that focuses on the music.