Stevie Nicks & Friends UCLA May 8, 1983 - Check out these never before seen pics!

Some pretty cool pics from this day... We've seen a few of Stevie and Mick... but never this many. Thanks to Lori Gentile for posting them.


The event was hosted by Eddy Money and Toni Basil (Oh Mickey You're so fine.. you're so fine you blow my mind hey Mickey!) Other celebs included Rick Nielson of Cheap Trick, Wayne Nelson of Little River Band and Jane Wiedlin from the Go-Go's. Stevie dropped the starting race flag. Mick Fleetwood's new band Los Cholos (which eventually morphed into The Zoo) played after the run.  Up on stage were Christine McVie, Billy Burnett, John McVie, Stevie Nicks, Bonnie Raitt, and Mick Fleetwood. 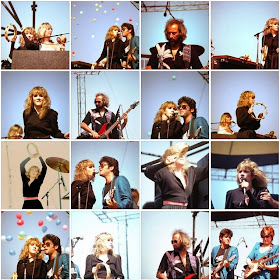