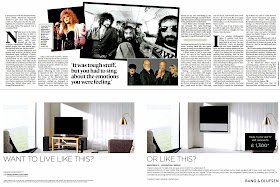 Despite the acrimony and excesses, and after 45 years as soft rock’s favourite soap opera, the legendary band have reunited.

Fleetwood Mac are fighting again. Rock-star fur is flying. But this is no ordinary argument. For one thing, the contretemps is being conducted in three different countries. Stevie Nicks fights her corner from an elegant apartment in Paris, Lindsey Buckingham boxes clever in his Californian study and Christine McVie counterpunches from her riverside penthouse in London.

Founder band members Mick Fleetwood and John McVie are keeping out of it. Fleetwood is licking his wounds after his fourth divorce and McVie is in hospital engaged in a more serious battle, with cancer.

The disagreement, believe it or not, concerns one of Fleetwood Mac’s few physical altercations. After 45 years of soft rock’s favourite soap opera, it’s astonishing that the players haven’t come to blows more often.

‘I was dancing on stage,’ begins Nicks, now 65, in the salon of her rented Parisian pied-à-terre. ‘It was the Tusk tour, 1980, Auckland, New Zealand. I was doing my thing with my shawl and Lindsey pulled his jacket up over his head and started mimicking me, behind my back. 'I thought, “Well, that’s not working for me.” But I didn’t do anything. This must have infuriated him, because he came over and kicked me. 'And I’d never had anyone be physical with me in my life. Then he picked up a black Les Paul guitar and he just frisbee’d it at me. He missed, I ducked – but he could have killed me.’

‘I’m not sure that happened,’ Buckingham, 64, states flatly at his gated LA estate.

‘Oh, it happened, all right,’ asserts Christine McVie, 70, drinking in a glorious view of the Thames. ‘I threw a glass of wine in his face.’

It was always the friction within Fleetwood Mac that produced the most magical music. The pristine production sheen of 1977’s gazillion-selling Rumours concealed a cauldron of simmering tensions and churning passions. They were an airport novel come to life, and with a sensational soundtrack.

Famously, during the recording of Rumours, chiffoned hippy siren Nicks split with Buckingham, her boyfriend of several years, and, after nearly a decade of marriage, Christine and John McVie stopped talking to each other, except to discuss musical matters. And some of the songs – Go Your Own Way, You Make Loving Fun, Dreams – were pretty brutal.

‘It was tough stuff,’ admits Christine McVie. ‘But you had to sing about the emotions you were feeling at the time. It was hands-on-the-table honest.’

‘Stevie and I weren’t even estranged; we just weren’t a couple any more,’ recalls Buckingham. ‘But none of us had the luxury of time and distance to allow for closure. And that’s what a shrink will tell you helps us to heal. So it was difficult on a lot of levels. Very difficult.’

August 7, 1987 was an especially difficult day. According to Mick Fleetwood’s memoirs, a meeting was called to discuss Buckingham’s decision to quit touring, and Nicks remonstrated aggressively with her former boyfriend. As she set about Buckingham, he screamed, ‘Get this bitch out of my way. And f*** the lot of you!’

The fracas, Fleetwood claims, culminated in Buckingham slapping her and bending her over the bonnet of a car, before storming off shouting, ‘You’re a bunch of selfish b******s.’

‘That was in the courtyard of my house,’ Christine McVie concurs. ‘There was a bit of a physical fight, and she wasn’t beating him up. It wasn’t nice.’

‘There wasn’t any physical violence,’ contends Buckingham. ‘It was an unpleasant situation that day, but you have to ask yourself the question, if someone is beating on your chest because they don’t want you to leave, isn’t that in a way kind of flattering?’

The level of acrimony the incident suggests begs another question: despite Buckingham and Nicks having put on a united front for their latest UK shows, during which they held hands, hugged and generally behaved civilly towards each other, have they ever actually agreed on anything?

‘That’s a very funny question,’ Buckingham laughs. ‘I don’t know how much we ever did agree. I’m trying to be tactful here, but there was never a huge set of sensibilities that we had in common.’

Of course, what the members of Fleetwood Mac did have in common – supernaturally inspired songwriting aside – was a fondness for drink and drugs. Cocaine and Champagne was their cocktail of choice.

‘Well, they go hand in hand, don’t they?’ shrugs McVie. ‘When we were in Sausalito making Rumours, the boys would be doing these huge rails of coke while Stevie and I would be in our own place with our little bottles of coke, with tiny coke-spoons that we’d wear on delicate chains around our necks. 'Very ladylike – much more refined – and actually fairly acceptable at the time. 'Inevitably, late at night the boys would run out and come looking  for ours.’

And is it true that during their private-jet-and-pink-hotel-suite years, Fleetwood Mac would take cocaine while they were performing on stage?

‘Absolutely,’ confirms Nicks. ‘We thought that’s what entertainers did in order to maintain that level of activity and creativity.’

‘Mick had this rotating platform covered with beer-bottle caps full  of coke so he could snort away as he was playing,’ marvels McVie. ‘At least us ladies would slip off stage for a  discreet toot.’

‘You know, I never bought cocaine,’ Buckingham sniffs. ‘There were other people in the band who may have  done that.’

Indeed there were. And they bought it by the boatload. Cocaine became synonymous with the Fleetwood Mac brand (Mick Fleetwood reportedly wanted to give their drug dealer a credit on Rumours). But by the mid-Eighties, the comedown had kicked in. ‘And,’ says Nicks, ‘the payback was a complete bitch.’

Nicks went to the Betty Ford clinic in 1986 to be treated for cocaine addiction. She then spent eight years hooked on the prescription tranquillizer Klonopin. She gained weight, her hair turned grey, she shed her skin, her ‘life force died’.

Addicted to various substances and making bad business decisions, Mick Fleetwood went bankrupt. Lindsey Buckingham had his own meltdown (documented on the rather brilliant Tusk album, replete with what Nicks cruelly refers to as ‘his bizarre ideas and weird little guitar solos’). Christine and John McVie, by their own admission, ‘drank far too much for far too long’.

Dark days followed, but disintegration and personal loss were nothing new to Fleetwood Mac. This, after all, was the tenth incarnation of a group that had already survived the departure of seven members, including Peter Green, the British blues guru who formed the band in 1967.

‘I had a real crush on Peter,’ admits McVie. ‘I had my eye on him. He was so charismatic and funny, sharp as a tack. And, as we know, he was slightly good at playing the guitar, which was enormously seductive.’

Green left the band, and indeed the planet, following an LSD overdose in Munich in 1970. He would never be the same man again. So began the ‘curse of the Fleetwood Mac guitarist’, with several unfortunate musicians ending up damaged or deceased. Lindsey Buckingham says, ‘There have been times when I’ve feared for my own well-being in the great scheme of things, because historically the track record has not been kind to the guitar players in this band.’

‘I met Peter Green recently,’ McVie says solemnly. ‘He came backstage after the London show I guested at. 'I sat down with him and he ate some of the buffet food, but he didn’t really speak and there was nothing in his eyes. No response. It was difficult and very sad.’

Darkness has descended in Paris. Stevie Nicks, wearing black silk and tinted glasses, is sitting in the shadows talking with calm candour about her love life.

‘I didn’t want to fall in love with Mick,’ she says of the band’s lanky drummer. ‘I had the attitude that you didn’t need to go after someone’s husband who had two children. So I felt awful, awful, awful. 'Then Mick fell in love with my friend Sara. That was not a good thing. But I always considered Mick one of the great loves of my life.’

Having extensively road-tested men – she has had affairs with Eagles Don Henley and Joe Walsh, producers Rupert Hine and Jimmy Iovine and even politician Jerry Brown – has Nicks ever considered women? ‘Oh no,’ she frowns, sitting bolt upright. ‘I’m not gay. I could never do that. I like men way too much. That would never work for me. 'I do love men. But I’m happy being single now. I don’t want to be in a relationship. I can do whatever I want. I’m in control.

‘But if the man of my dreams were to walk in right now, then all that s*** I just said would go straight out that window into the Seine.’

In LA, Lindsey Buckingham sighs: ‘I seldom look back. Living in the present is more important to me now. I’m very fortunate. 'I have an amazing wife and three beautiful children, and that certainly makes you less obsessive about your art as a musician – which I’ve always felt was more like painting than anything. 'And I’m sure there were times when I became a little unbearable and demanding in trying to make those pictures perfect. But I guess there will always be things you’ve done that you regret having done.’

Beside the Thames, Christine McVie is in buoyant mood. It’s six weeks since she made a surprise appearance on stage with Fleetwood Mac at London’s O2 Arena on September 25, an experience she ‘enjoyed immensely – not quite to the point of being tearful, but it felt really good and completely natural’.

Although in late October the band were forced to cancel the Australasian leg of their tour due to John McVie’s urgent cancer treatment, the grapevine remains abuzz with gossip. Bookmakers have long since suspended betting on Fleetwood Mac headlining Glastonbury 2014 (Macstonbury!), and despite Buckingham’s reservations about her temporarily rejoining (‘She can’t just come and go’), Christine’s cameo has fuelled hopes of a ‘classic Mac’ reunion next year.

‘Lindsey can be difficult and a bit of a control freak,’ she says. ‘But that’s his job, and that, for better or worse, is his character. And he has mellowed over the years.’

McVie reluctantly acknowledges that her voice, piano and presence make the band somehow complete. Without her, Fleetwood Mac serve up a satisfying set of ingredients, but she is the sauce that unifies them.
‘The gravy?’ she suggests. ‘I think we all sensed that.’

As for Fleetwood Mac’s future recording plans, McVie lets slip that she has recently written new songs for the band. ‘I sent them to Lindsey and he loved them,’ she reveals. ‘You could hear his mind whirring, figuring how he could improve them, Mac them up.’

Then out of the blue, in that honeyed voice, she starts to sing.