Haim, Ladies of the Canyon, Mumford and Sons and others referenced Fleetwood Mac, although the band’s own EP barely made a dent in public consciousness 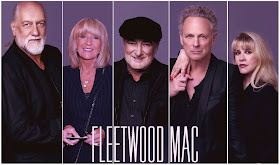 By: John Sakamoto
The Toronto Star


A week after closing the annual mud bowl that is the Glastonbury Festival, Mumford and Sons surveyed the 60,000-strong throng at Olympic Park, the sporting complex built for the 2012 Summer Games, and proceeded to lead a couple of dozen musicians — every act on the bill that day — through an epic communal sing-along on Fleetwood Mac’s “The Chain.”

Two months later, one of those acts, a trio of L.A. sisters collectively known by their surname, Haim (rhymes with “rhyme”), released Days Are Gone, one of the year’s most acclaimed and successful debuts.
Reaction to the album tended to be preoccupied with the band’s influences, which ranged from Motown to TLC but most often coalesced around Southern California rock in general and Fleetwood Mac in particular.

What Do You Get For The Man Who Already Has The Complete Fleetwood Mac Discography?

By David Fleischmann
The Onion


Well, Christmas is almost here, and as usual I’ve put off my holiday shopping until the last minute. It took me a while to figure out what I was going to get for everyone, but I’m just about ready to head over to the mall: I’m thinking a new pair of earrings for my wife, or maybe a bottle of that fancy perfume she likes, and for my kids, there’s always some hot new toy or video game gizmo that they just have to have, but I’m still completely out of ideas for what I’m going to get my brother Michael. I mean, this is someone who already owns the entire Fleetwood Mac discography, so what else is left to give him?

Continue to the full article
Nickslive at Tuesday, December 24, 2013
Share