It all began four years ago this month when Stevie wrote "Moonlight (A Vampires Dream)" - the first song and catalyst that would kick start this whole "In Your Dreams" era in motion.  After writing the tune in Melbourne, Australia in December, 2009 while on tour with Fleetwood Mac after seeing the second installment in the Twilight movie series Stevie demoed the song and decided at that moment she was ready to start a solo album.  Fleetwood Mac finished their world tour and came off the road later that month, Stevie called up Dave Stewart - asked him to produce the album - he was down for that - and the fun began! 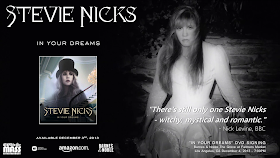 Part 1 - The Album: The recording of new music wasn't actually known in the fan community until early February, 2010 when Dave send out a Tweet saying he had just written a song with Stevie called "Everybody Loves You". By early March, 2010 it was revealed an album was definitely in the works. Cut to July, 2010 and Dave reveals they are filming the whole experience as well in the hopes of creating a film (documentary) about the process. We now know the filming began shortly after they started collaborating on the album earlier in the year. They filmed all through 2010 while the album was being recorded right up to and including Lindsey Buckingham's contribution in November, 2010. By early December the album was finished, mixed and ready for the world.  The album hit the street May 3, 2011 and fans loved it. It was really well received by the critics... Stevie was back!

Part 2 - The film: Always a piece of the puzzle, a companion piece to the "In Your Dreams" album, Dave and Stevie had this plan to release the film in threatres or art houses across North America and eventually on DVD. With Stevie's promotional schedule for the album along with touring taking up a lot of her time in 2011, there obviously wasn't a lot of time to dedicate to the process of editing the year long filming of the film to get it ready for release, especially if you want to be there yourself to be apart. The amount of footage must have been extraordinary. Stevie was out on the road for a lot of 2011 first with Rod Stewart two months before the album even came out. She would basically be out on the road on tour right through early December, 2011 playing dates in the U.S., Canada, the UK and Australia.

After the passing of her Mother in late December, 2011 and after some time to mourn, she spoke with Dave Grohl in 2012 around the time of the "Sound City" documentary filming which she appears in.  Dave's motivating talk with her kicked it into gear and she dedicated all her time for the next number of months to finish the film (Stevie gives Dave Grohl special thanks in the movie credits). She didn't re-surface until six months later in Spring 2012 when she headed back out on the road once again to back up the "In Your Dreams" album touring solo and again with Rod Stewart. She would continue on the road through to the premiere of the "In Your Dreams" film in October, 2012 at the Hamptons International Film Festival. The film would eventually make it's way to a number of film festivals and film centers in the fall of 2012 and early 2013 across the U.S. and Canada with Stevie attending a number of the events. In April, 2013 "In Your Dreams" finally made it's North American theatrical debut, just like Dave always planned. By this time Stevie was just beginning another world tour with Fleetwood Mac. The film would follow her or precede Fleetwood Mac coming to town. "In Your Dreams" would open in cities the band was about to play in. This would be the case through June, 2013. Prior to this short theatre run, on May 14, 2013 the film was made available to the general public to purchase for those that couldn't see the film in a theatre - but only via digital download from Stevie and Dave's website or through itunes and Amazon. Cable On Demand would followed suit.

After Fleetwood Mac took the summer of 2013 off they headed to the UK in September to resume their tour.  "In Your Dreams" made it's UK Theatrical Premiere in mid September. With the press release on the UK film Premiere in July or August, a DVD release month was set as November, 2013! FINALLY!  The film was also scheduled to screen at the Brisbane International Film Festival with Stevie set to attend the a Q&A. With Fleetwood Mac's tour cancellation, Stevie wasn't able to attend, but the film still premiered in Australia just this past month. During this time the actual DVD release date became clear... It would be December 3rd TODAY! (in North America)

So now that we finally have the DVD in our hands (or soon to be in our hands), this looks like it officially closes the chapter on "In Your Dreams". It's been a long four years, but I think it was well worth it and fun! It was an amazing time frame in Stevie's career beginning in early 2010 right through to the release of the album, the touring that followed and the anticipated release of the film, and now this DVD.  If you were around a few years ago when it began and were following along, you know.  It was the first time a lot of us fans felt like we were apart and along for this journey. We can all thank Dave for this experience as much as Stevie.

So personally, to you Dave and Stevie... Thank you!

All International Orders: Warner Bros.
Warner Bros. version is a "Region 0" DVD meaning unrestricted international usage. So for those outside North America, this DVD will work in your DVD players.
Nickslive at Tuesday, December 03, 2013
Share