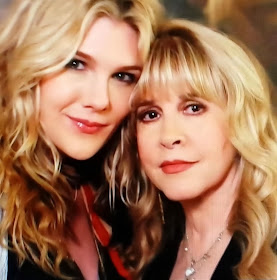 
Double, bubble, toil, and trouble, we need Stevie Nicks on the double! (Ack, sorry we know that was majorly lame.) Our amazing Marc Malkin recently chatted with Lily Rabe and she revealed a little bit of behind-the-scenes scoop that you've just gotta hear.

"She brought me this amazing black velvet jacket and lace
skirt from her early
Fleetwood Mac days."

So what will Nicks be doing on the show? The Coven star gushed,

Episode 10 titled "The Magical Delights of Stevie Nicks" finds Fiona attempting to out the new Supreme with a visit from Stevie Nicks. This first episode in which Stevie appears will air January 8th.  A second episode that Stevie appears in hasn't been announced yet, but will take place sometime before the series ends in January.