Fleetwood Mac Live in Las Vegas
MGM Grand Arena - December 30, 2013
This is the one I wanted to see... Stevie flailing away is memorizing! she totally nails this. The epic adventure of Gold Dust Woman continues! 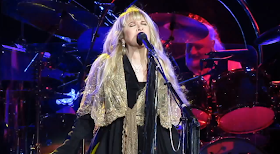 Stevie talks about her 25 year old beige boots she's wearing and why she's wearing them... she speaks about wearing them during her part on the upcoming American Horror Story. Then she dedicates the song to her new friend Katy Perry.