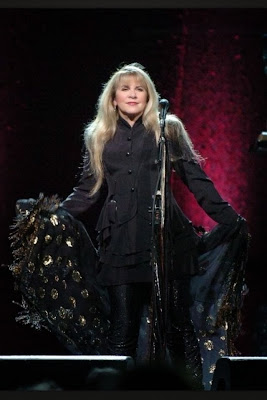 Here's the section on Stevie.

The title of episode 10 is “The Magical Delights of Stevie Nicks,” so she’s heavy in it. She was a trouper and came in and did a song. Everyone came in for it. She did autographs and photographs. She was very cool. She talked a lot with the actors and watched, and she was really good in her scene. Later, she called me and said, “You know, I’ve been watching the show obviously, and I’ve been reading the scripts, and do you know you’re doing on the show something I wrote a song about with Fleetwood Mac back in the day? It was a B-side of one of our singles.” And she said the name of the song, which I won’t reveal, and I was like, “Of course!” She thought she should sing that song to the girls, so we booked her for another day, and we did another song, which will be in the finale. Any time you can do anything with Stevie where you can find out the true secret of her shawls is amazing.

So you’re promising to reveal that?
Oh, yeah! The Secret of the Shawls.

.... So, am I the only one thinking "Silver Springs" as the b-side to one of the singles?  And it looks like she'll be singing this song in the final episode of the season at the end of January.