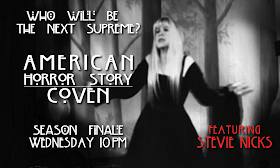 "American Horror Story: Coven" is coming to a close Wednesday (Jan. 29), with the girls set to take part in the Seven Wonders test to find out the identity of the next Supreme. We've seen the episode and we have to say, it is full of so many twists and turns our heads are still spinning. Read on for a few spoiler-y tidbits.