While looking for signs of Lindsey Buckingham... Stevie Nicks kind of unexpectedly showed up at tonights Grammy's. With the focus being on Lindsey's performance and this awards show, it was a little surprising to see her there... But this is cool... Glad she went to celebrate a night of music and support the industry. She looked great as usual, made some waves on the Red Carpet with her arrival on the arm of Doug Morris Chairman and CEO of Sony Music Entertainment.  She hit a few news reporters along the way - Access Hollywood, The Insider, The Grammy's (you'll likely see video here in the coming days). She stopped to speak with Katy Perry who told Ryan Seacrest afterwards that she will be performing her latest single, “Dark Horse,” and that it was partly inspired by Stevie Nicks.  Katy's performance was dark, gothic and she was drapped in long flowing chiffon.  If that's the inspiration... I'll take that. It looked pretty good!  The song, not so much!

No sign of Lindsey on the red carpet which I total expected!  He was spotted during the telecast in the audience a couple of times, but that was about it until he took the stage with Dave Grohl, Trent Reznor and QOTSA... See below. 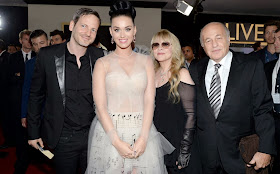 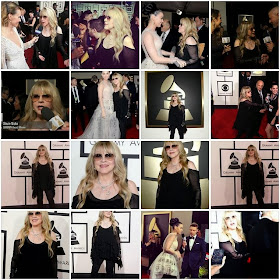 LINDSEY BUCKINGHAM performed a two song medley with Nine Inch Nails, Dave Grohl and Queens of the Stone Age.  We heard a really cool version of of "Copy of A" from Nine Inch Nails... Lindsey kicked it off with some finger picking which almost sounded like the opening of "Miranda", but sped up.. He sounded great, the whole song did.  The second song, "My God is the Sun" was a Queens of the Stone Age song... But the telecast was cut it off before they could finish to go to their sponsor ads! So frustrating! They could have waited just a minute or two more.  Anyway, for what we saw, Lindsey looked and sounded great!

Alternative rock all-star team ends 56th GRAMMY Awards with a mashup of Nine Inch Nails' "Copy of A" and Queens of the Stone Age's "My God Is the Sun."
Billboard 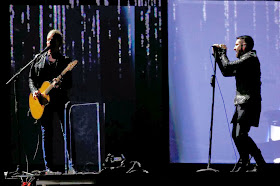 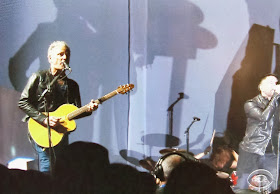